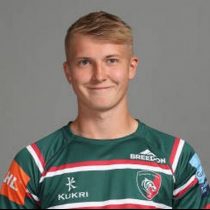 After a first involvement in rugby with Newark RFC as a five-year-old, Jonny Law played his way into the developing player programme and then academy at Leicester Tigers.

As well as his rugby, Jonny played cricket and football at school, studying at Kings School in his hometown at Grantham and then at Rugby School. His brother has played rugby for England Counties.

Originally a fly-half, he moved to scrum-half as he played in Leicester’s Under-18 League title-winning squad in both 2017/18 and 2018/19, and made his senior debut as a replacement in the Premiership Shield at Northampton Saints in January 2019.

April 2020 saw him sign a new deal with the Tigers' Development Squad.