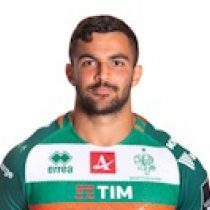 Petrozzi arrived in the ranks of Lions U18s during the 2013/14 season and went on to win the Italian Championship.

He was then named in the Italian U20s, winning the 2015 U20s Six Nations before signing for Venice-based San Dona Rugby club who compete in the Italian Top 12.