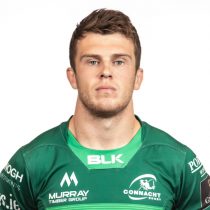 Farrell was a part of the London Irish A-League squad in the early 2016 season, but he really made a name for himself while part of the Leinster Academy. Farrell has represented Ireland at U19 and U20 level.

He was captured by Bedford Blues for the 2016/17 but his high work-rate attracted Pro12 side Connacht, signing the centre with immediate effect in January 2017.

Connacht boosted its options at midfield for 2017/18 season with the contract extension of Farrell.

The former Bedford Blues player joined the province in early 2017 and, after 20 appearances, he extended his contract with the province up to the end of the 2019/20 season.

In January 2019, he was included in the senior Ireland squad ahead of the Six Nations tournament but a shoulder injury put his international debut on hold.

As of June 2020, Farrell has made 57 appearances for Connacht and has scored 75 points.