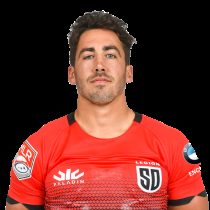 After making his debut in 2014, Burton had a breakout season with the Force in 2014, adding 16 caps to his name with eight matches in the starting line-up.

The Hale School product possesses a strong running game with ball in hand, is physical in defence as well as a brilliant kicking game.

He starts the 2017 season with 18 Super Rugby caps since his debut in 2014 against the Stormers in Cape Town.

After three seasons with the Force, Biarritz managed to secure the services of Burton for the 2017-18 season.