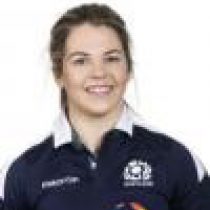 Lisa has played for Scotland’s under-16, under-18 and A teams and made her Scotland debut off the bench against Ireland in the last 2010 RWC game as an injury replacement.

She captained her country for the first time in the 2016 Six Nations opener against England at Broadwood.

Lisa was then called into the Scotland Women squad for the 2017 Six Nations tournament.