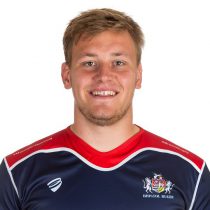 Batley is powerful and abrasive back-row who can play in the 2nd row. Another product of the successful Hartpury College, Joe featured heavily in the England U18 and made his U20 debut a year early coming off the bench for England v Wales on 7th February 2015.

He spent the 2014/15 season on loan to Hartpury RFC in National league whilst playing for Gloucester ‘A’ and made his 1st team debut v Exeter on the 1st November 2014.

Having joined the Academy from Hartpury College, Batley made four appearances for Gloucester before signing for Bristol Rugby in April 2017.

In his first campaign with Bristol, Batley helped the club to their Championship title.

He finished the 2017 Premiership season with 11 appearances, scoring 10 points.

In December 2019, the utility forward made a loan switch to Leicester Tigers as injury cover for Hanro Liebenberg.

He made his Tigers debut on the same day he signed for the club.

While on loan with the Tigers, Batley signed a one-year deal with Worcester Warriors commencing on 1 July 2020.