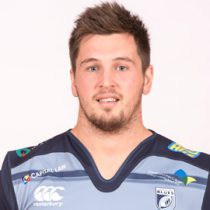 Thyer made his debut for the Newport Gwent Dragons regional team in 2015 having previously played for the Blues academy and Pontypridd RFC.

Thyer made his senior Cardiff Blues debut in the LV=Cup clash with Scarlets at BT Sport Cardiff Arms Park in November 2014.