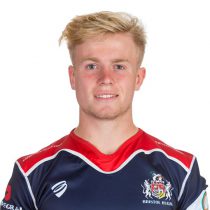 As a youngster Protheroe grew up in Wales, near Swansea. Aged 8, he joined Waunarlwydd rugby club and went on to play for his school and district.

However at 16 the talented back missed out on gaining a place in the Ospreys academy. But the Welsh region’s loss was Hartpury’s gain.

At the famous finishing school for top class rugby players Protheroe, under the watchful eye of then Hartpury director of rugby Alan Martinovic, switched from fly-half to full back.

On 27 May 2015, Protheroe signed his first professional contract with Gloucester Rugby, going on to play for the Cherry & Whites on four occasions.

In May 2017, Bristol announced that the highly rated youngster will join the clubs ranks for the 2017/18 season.

The full back - who can also operate at fly half - joined from Gloucester and has also represented England at U18 and U20 level.

Protheroe drew the attention of rugby fans on his debut season for Hartpury in National One, helping them clinch promotion to the Championship after playing for them on a dual registration in this campaign.

In 2018, Protheroe lit up Ashton Gate, winning try of the season for his length of the field effort versus Cornish Pirates.

On 26 February 2020, the Ospreys announced the signing of Protheroe from Bristol for the 2020–21 season.