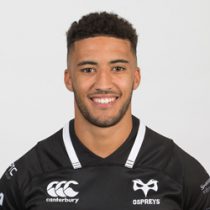 Giles came through the development lane via Waunarlwydd RFC and Gowerton Comprehensive School before making a mark as a prolific try-scorer in regional age grade rugby.

Committing his two years to play for Wales U20s at the beginning of 2016, he started in all five matches as the Welsh youngsters completed the Grand Slam, scoring three tries.

In August 2016, he signed a three-year deal with Ospreys.

Giles received a call-up to the Wales squad for the remainder of the 2016 autumn international series, replacing injured Hallam Amos.

In May 2017, the uncapped Ospreys man was named in the Wales summer tour squad to play Tonga & Samoa.

Giles had a breakthrough season for the Ospreys, with 14 tries in all competitions.

September 2017 saw him sign a new three-year Ospreys deal until the summer of 2020 following a breakthrough season at his home region.