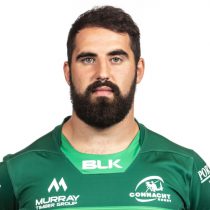 The loosehead impressed on a number of occassions for Munster 'A' after making his B&I Cup debut in the 2015 quarter-final against Doncaster Knights.

Began a one-year Development contract in June 2015 and subsequently signed a contract extension for the 2016/17 season.

A pectoral tear saw the prop miss much of the 2015/16 competitive season but following his return, he impressed in both club action for Dolphin and for Munster A in the final two rounds of the British and Irish Cup.

He made his PRO12 debut in November 2016 against Ospreys in Irish Independent Park and a week later featured against the Maori All Blacks in Thomond Park.

McCabe spent a short time training with Connacht as part of a loan deal in January but was recalled by Munster Rugby in February to start in the front row against Edinburgh in the Guinness PRO12.

After playing against Doncaster in the rescheduled B&I Cup game in early January he joined Connacht Rugby on a loan basis the following week.

In May 2017, Munster announced the departure of the prop, with him subsequently joining Connacht for the 2017/18 season.

The following week he started the friendly victory over the Maori All Blacks at Thomond Park and ended the season with four PRO12 appearances to his name.

In April 2019, it was announced that he would leave Connacht at the end of the 2018–19 season, having made a total of 37 appearances in his time with the team, however, due to an injury to new signing Paddy McAllister, McCabe returned to Connacht in November 2019 on a short-term contract.