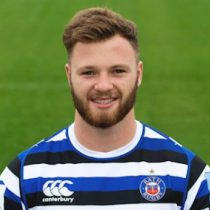 Wright was part of the larger training squad who gathered in Newcastle as England U20s finalised their preparations in May 2016 but then head coach Martin Haag decided to only name him as a reserve.

A tournament-ending injury to fly-half Theo Trophy-Clews against Italy handed Wright a lifeline, however, and he was called back to link up with the squad.

That last game of the group stages against Australia helped England U20s secure their place for the semi-finals as the top seeded side but it also was a special occasion for Yorkshire Carnegie – the only Championship club to be represented in the squad.

Max has managed to make plenty of appearances in both the B&I Cup and the Championship.

The agile centre gained recognition in the and quickly showed his promise, with two tries in 12 appearances for Yorkshire Carnegie.

He replicated that form for the England U20s, joining the squad who went on to take the title in 2016. Wright was also part of the U20s squad who won the Grand Slam in 2017, alongside Mercer and Josh Bayliss, and represented his country this summer in Georgia.

January 2020 saw him commit his future to Bath Rugby, putting pen to paper on a new three-year contract extension.