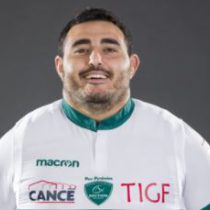 Malik Hamadache was born in Avignon, his father Boualem. He came through the academy of the Bourgoin-Jallieu and made his debut in the Fédérale 2 aged 18.

He is a member of the Algeria national rugby union team which played a friendly match against pro team, Agen in 2008, before leaving Marseille to join Stade Phocéen in Fédérale 1. He remained there for two seasons, playing in the same team as Jonah Lomu.

In 2009, he was again selected by Algeria to play a match against the academy squad of Stade Français, which his team won 19–17.

In 2010, he signed with the Cergy Pontoise to play in Fédérale 1. When the team was relegated at the end of the 2010–11 season, he joined the Dijon.

In 2013 Hamadache joined French side Albi, he spent 3 years at the club before joining Pau in 2016.

He was named in the French Barbarians side to tour South Africa in 2017.