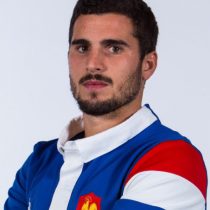 Sebastian Bezy applies his trade as a scrumhalf for Toulouse. He has over 60 appearances for the team and has scored more than 200 points for the club. He made his international debut for France in a 23-21 win over Italy in the 2016 Six Nations.

June 2016 saw Bezy being part of the France 28-man squad for their tour of Argentina.

Bezy's form during the 2018/19 season earned him a call up to the France squad following an injury to Morgan Parra.