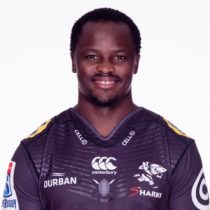 A graduate of Dale College in the Eastern Cape of South Africa, Lubabalo (‘Tera’) Mtembu appeared for the 2010 South African U20 team, representing his home nation in all four test matches.

Mtembu went on to play for the South African National Sevens side in 2010 and 2011 before turning out for the Sharks in 2011 having represented the Border Bulldogs at youth level.

His senior debut came in 2011 featuring in both the Currie Cup and the Vodacom Cup before he was added to the Super Rugby squad the following year.

2014 saw him being named as the Sharks' Currie Cup and continued to hold a leadership role at the franchise. Struggles with injury saw Mtembu enter the 2017 Super Rugby season with 24 Super Rugby caps.

Mtembu enjoyed an injury-free 2017 Super Rugby season and featured in all of the Sharks matches scoring two tries.

The versatile and powerful loose forward took his Super Rugby cap tally to 47 and his Currie Cup tally to 45 by July 2020 before he signed a three-year deal to join MLR side New England Free Jacks.