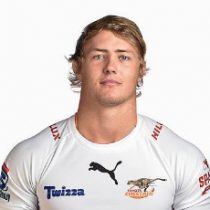 After high school, Kruger moved to Bloemfontein to join the Free State Cheetahs. He made seven starts for the Free State U19 team during the 2012 Under-19 Provincial Championship.

In 2013, he made the step up to Under-21 level and played in ten of the Free State U21 team's matches during the 2013 Under-21 Provincial Championship.

He started the 2014 season by representing university side UFS Shimlas in the 2014 Varsity Cup.

Kruger started seven of the UFS Shimlas' matches during the 2015 Varsity Cup competition, helping Shimlas finish top of the log and qualify for a home semi-final. He started the final against the NWU Pukke as Shimlas ran out comfortable 63–33 winners to win their first ever Varsity Cup title.

He joined the Griffons in 2016 and spent a year at the side before joining Griquas in 2017.

After impressing with the Griquas during the 2017 Currie Cup Kruger signed a deal to join the Cheetahs and was called into the PRO14 squad in October.