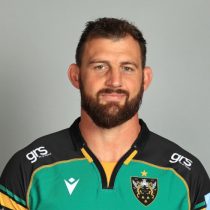 Like many of his contemporaries, Wood spent time in New Zealand honing his game and represented North Otago for a season in 2006.

Upon returning to England, Wood made his Worcester Warriors debut in the opening round of the 2007-2008 Premiership. His Worcester performances attracted suitors, and, in 2010, he agreed to join Northampton Saints.

Wood made an immediate impression when he joined Saints in 2010 with a man-of-the-match performance against rivals Leicester Tigers. Shortly after agreeing his move, Wood was called up to the England Saxons’ squad for a game against Ireland. 2011 was a great year for him, not only did he win the 2011 Premiership Player of the season award, but he also made his England debut in a 2011 Six Nations game against Wales.

Wood impressed enough on his debut to retain his starting berth against Italy and France. He was pivotal in England's famous win against the All Blacks in November 2012 and was awarded man of the match for his efforts.

Started throughout 2013 & 2014 RBS 6 Nations competition but since has made only 2 appearances in the championship, off the bench in the final two rounds of 2015. Captained the Saints to two pieces of silverware in 2014, picking up the European Challenge Cup and Premiership titles.

Wood continued to impress recently, making 13 carries and putting in a massive 21 tackles over 2 games the 2015 World Cup. In July 2016, after seeing his constant improving performances, Northampton Saints named Tom captain of the side for their 2016/17 season.

Having made over 168 appearances for Saints, Wood went into the 2019/20 season as the side's co-captian.

In June 2021, he signed a new deal to commit his future at Franklin Gardens.