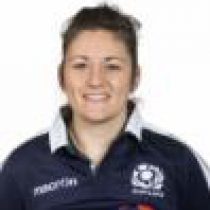 Balmer made her international debut off the bench against Spain in January 2011, scoring her debut try against Wales in the second 6 Nations game of 2011 at Burnbrae.

For the November 2011 victory (33-10) over the Netherlands in Amsterdam, she took over on-field captaincy duties from the injured Susie Brown and continued into the 2012 6 Nations.

In January 2017, she was named in the Scotland Women squad for the 2017 6 Nations tournament.