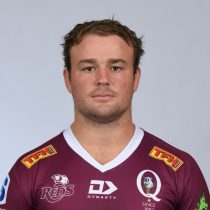 An Australian Schoolboys representative and a product of the Reds U20s Academy, Wilson was named the Queensland Rugby Union’s (QRU) U19s Player of the Year for 2018.

In just his first year out of school, Wilson forced his way into the Brothers’ Premier Grade forward pack and went on to make his NRC debut for Bond University Queensland Country in Round 1 against the Vikings in Canberra this year.

In October 2018, Wilson signed a two-year deal with the Queensland Reds for the 2018 season.

May 2019 saw him being named in the Junior Wallabies squad for the World Rugby U20s Championship and towards the end of 2019 he signed a contract extension with the Reds.

Wilson made his Super Rugby debut in 2020 and had an incredible debut season which saw him play every game for the Reds in the Super Rugby AU and Super Rugby seasons.

His form lead to him being named in Dave Rennie's first Wallabies squad in 2020.