The semi-finalists who will contest the Mitre 10 Cup have been named after an action-packed Round 10. In today’s (Sunday) fixtures, all three losing teams, remarkably, posted 33 points and surrendered leads.

It took 31 minutes for the scoreboard to show something as CM opened the scoring with a try. Southland picked up a yellow card in the beginning of the second stanza which contributed to them conceding another try. In desperation, Southland hit back with a try of their own and, ten minutes later, had clawed back to trail CM by only two points (14-12). Both teams added another try before the final whistle but CM had done enough to take home the victory.

Wellington turned the screws on Manawatu, just as they were expected to do, and ran out 31-5 victors at Sky Stadium. The first half was tightly contested as just two points separated the teams as they jogged off for the break but Wellington fired in the second 40.

In perhaps the biggest upset of the round, Northland pulled one over Waikato, 28-17, at Kaikohe Rugby Club.

Waikato enjoyed a slender lead at half-time but could not contain a superb attacking and defensive effort from Northland in the second stanza.

Defending champions Tasman took victory in this fixture though they were made to work for it as Otago put up a stout challenge.

Tasman looked the better team and enjoyed the lead for the majority of the game but were forced to weather a storm in the final stages as Otago fought hard in their attempts to pull off a narrow victory.

Naki were ahead at the break but the Magpies showed great composure and determination in the second half to build their score into a winning one.

Bay Of Plenty vs North Harbour:

In a remarkable display of resolve, Bay Of Plenty turned around a 21 point deficit to beat North Harbour and claim a spot in the play-offs.

The entertainment factor of the game was significantly high as both teams employed running rugby tactics which saw the production of some fantastic attacking efforts.

Canterbury pipped the Aucklanders in a highly competitive game at Orangetheory Stadium in the final game of the round.

Auckland started well, dotting down twice before Canterbury opened their account after 15 minutes.

While Auckland dominated the first half, the second belonged to Canterbury who finally took the lead in the 57th minute and rumbled on from there to record a great win. 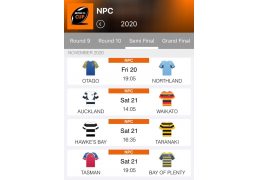