Biggest moves and transfer rumours of the week

A busy week on the player market this week saw the likes of Gloucester, Leinster and Harlequins all release squad updates while there were a number of confirmed signings across Europe. Former Wallabies flyhalf Matt Giteau looks as if he may play one more season of rugby despite saying that 2020 would be his final year as a professional.

The pair have been linked to a move to the new MLR franchise, the LA Giltinis, in Los Angeles.

Gloucester confirmed this week that three players will be leaving the Club to move to Japan.

Tom Marshall and Franco Marais have signed deals to join former Gloucester coach Johan Ackermann at NTT Docomo Red Hurricanes. Meanwhile, World Cup-winning Springbok lock Franco Mostert has also chosen to further his career in Japan is likely to fill the void RG Snyman left at Honda Heat. Four other players, whose contract had expired, will also be leaving at the end of this month. Owen Williams will also join Ackermann in Japan along with Tom Marshall and Franco Marais.

As he did at Gloucester, Ackermann has brought a few South Africans with him to Japan with Springbok World Cup winning winger Makazole Mapimpi joining the side in a move that will still see him turn out for the Sharks during Super Rugby.

Mapimpi's teammate at the Sharks, Tyler Paul, also joins the side and brings versatility to the side with his ability to play lock and flank. The fourth and final South African to join the side is 22-year-old Lions openside flanker Ruan Vermaak. 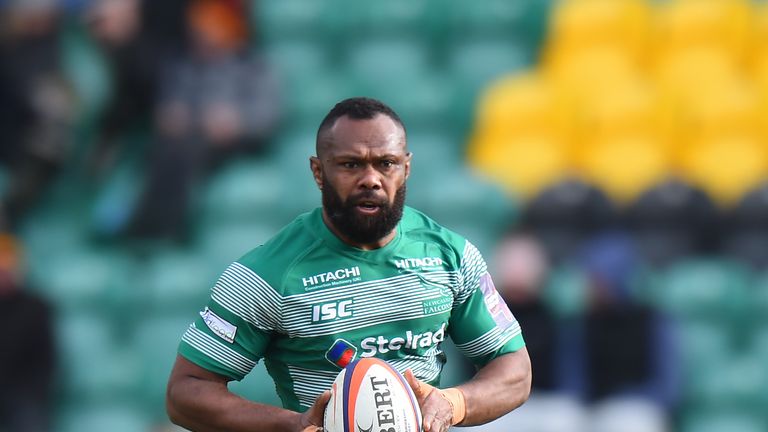 TOP 14 strugglers Agen were linked with the major cope of Harlequins' winger Gabriel Ibitoye according to a report by French newspaper Midi Olympique.

Agen have finished the last three seasons, including the 2019/20 season, in the bottom four of the TOP14 but the club are looking to make some high profile signings to bolster their chances of staying up in the coming seasons.

Having missed out on the signature of Springbok flyhalf Elton Jantjies, the club have also been linked with Harlequins' flyhalf Brett Herron by the newspaper.

According to Midi Olympique, Agen are close to securing the signature of Harlequins' livewire winger Gabriel Ibitoye.

Pau have confirmed the signing of Chiefs' midfielder Tumua Manu who has signed a two-year contract with Section Paloise in the Top 14.

Leinster Rugby has confirmed 28 new contracts for the 2020/21 season, while also confirming their list of departees.

The 22-year-old, capable of playing in the midfield and outside-backs, was born in London and lived in the UK for a decade before his family emigrated to Melbourne, Australia.

Potter has previously represented NSW Country Eagles and Melbourne Rising in Australia’s National Rugby Championship before signing a professional contract with the Rebels in 2019.

Leicester Tigers have also welcomed Australia international Blake Enever to the club after agreeing a deal with the second-rower.

The 28-year-old Enever has made more than 50 Super Rugby appearances since his debut in 2012 for then-champions, the Queensland Reds, before moving to Canberra to join the ACT Brumbies in 2015.

“You look at the squad, it’s full of experienced internationals & lots of really exciting young talent coming through, the chance to work with them was something I couldn’t let pass me by!”

The Australian, who had a stellar playing career in France with Clermont Auvergne, has signed a three-year deal to join the Liberty Stadium side.

James, 38, joins new Head Coach, Toby Booth, at the start of a new era for Wales’ most successful region.

The former fly half, who won the European Challenge Cup in 2007 and the Top 14 title in 2010 as a player with Clermont, will take up his position in July.

Nakarawa made his Glasgow Warriors debut against Connacht in November 2013 and went on to be awarded Player of the Match in Glasgow Warriors’ victorious 2015 Guinness PRO12 final.

Talented English back-rower Ted Hill has committed his services to Worcester Warriors for the next two years.

The 1.96m, 112kg Hill has one cap under the belt for England and continues to impress Warriors coach Alan Solomons.

He has such a bright future ahead of him and I’m a big fan of his.

Something I wrote on him back in April. 👇 https://t.co/zbK7c7ii7V

Bulls and Josh Strauss partways as another lock arrives

Strauss signed a two year deal with the Bulls in the beginning of 2020, however, Director of Rugby Jake White conveyed a message through Strauss’ agent that he would not be part of their plans going forward.

The Blue Bulls also confirmed the signing of 26-year-old lock forward Jan Uys from French Top 14 club CA Brive who will join the Bulls as of 1 July.

The 1.99m and 120kg behemoth made his first-class debut in the 2014 instalment of Vodacom Cup in the colours of Western Province after representing the union at U21 and U19 level. He also contributed to UCT's cause in the 2014 Varsity Cup where the Ikeys clinched the final in the most dramatic fashion.

Uys spent the last few seasons with CA Brive after an initial six months with fellow Top 14 outfit Pau. It did not take him long to carve out a reputation as powerful ball carrier in the unforgiving environment that is French rugby, but what sets him apart is his ball-handling ability, an attribute usually more associated with loose forwards and backs.

Wales' centre Nick Tompkins has committed his long-term future at Saracens but will spend a season on loan at Dragons, the club confirmed on Friday.

Saracens have confirmed the contract extension of Richard Wigglesworth, who will remain at the club until the end of the 2019/20 season. The 37-year-old has been with the club for over a decade and will be available for the rest of the Premiership campaign and the eagerly anticipated Champions Cup quarter-final with Leinster. The scrum-half was involved in the club’s first-ever Premiership title back in 2011 and has been a part of every domestic and European success since.

Saracens have also confirmed the signing of USA international flyhalf Will Hooley from Bedford Blues. The 26-year-old, who can also play at full-back, moved to the Championship side from Exeter Chiefs ahead of the 2017/18 season and soon earned an international call-up with the USA.

Beale calls time on his days with the Waratahs

Kurtley Beale will be leaving the NSW Waratahs having signed a deal with French club Racing 92.

Beale has been a long-time servant of the game in Australia with 142 Super Rugby caps (128 for the Waratahs and 14 for the Rebels) under the belt and as well as 92 tests for the Wallabies. Australia's policy means that Beale, while plying his trade overseas, may still be selected for the national team in future, although it is rumoured that he will not feature in head coach Dave Rennie's plans.