A hallmark of the Springboks run to the Rugby World Cup title in 2019 was the now famed 'Bomb Squad' with Rassie Erasmus taking full advantage of South Africa's riches in the pack with a 6-2 spilt in favour of the forwards on his bench.

Essentially, the Springboks were able to bring a fresh pack on the second half a test match and the minute a forward looked slightly off the pace - he was replaced. This worked brilliantly for Erasmus with Francois Louw memorably claiming a match-winning penalty after replacing captain Siya Kolisi in the semi-final win over Wales. The hulking presence of RG Snyman and Franco Mostert replacing Eben Etzebeth and Lood de Jager maintained the Boks physicality for the entire match with the versatility of Frans Steyn making this all possible for the Erasmus-led side.

Replacing veteran Tendai Mtawarira with the equally world-class Steven Kitshoff in the front row along with Malcolm Marx and Vincent Koch paid massive dividends for the Boks with Frans Steyn's versatility in the backline making all this possible. However, when Jacques Nienaber named his squad for Saturday's first Test against the British & Irish Lions in Cape Town, his bench had a far more traditional look to it with a 5-3 split of the forwards and backs.

The new head Bok head coach, who takes charge of just his second test match on Saturday, explained the change in the bench was to provide specialist cover for pivot Handre Pollard. The flyhalf has recently come out of isolation following a positive COVID-19 test but also missed a large chunk of the European season with Montpellier through injury while the likes of Damian de Allende and Makazole Mapimpi are short on game time.

"Handre hasn't been involved in a lot of rugby," Nienaber said.

"We will go with a 6-2 split if it's available to us and we feel confident, but Handre hasn't played a lot and he has just come back from Covid.

"It's the same for Mapimpi, so I think we just thought it wasn't the right time to have two backs on the bench."

While the forward heavy bench worked wonders for the Springboks during the tournament in Japan, the essence of the 'Bomb Squad' is far more complex than simply replacing almost the entire pack.

"The moment the players on the field are not producing what he is required, then they could come off," Nienaber explained.

"Those starting have a specific role to play, and the moment they don't fulfil that role anymore due to being tired or not being exposed to rugby for some time, then that's when we will make a substitution.

"If a player fulfils his role up until minute 80, then there is no reason to substitute him and the players know that." he added.

So while the Springboks will be fronting up with one less forward on the bench on Saturday, the importance and role of the Bomb Squad has not changed.

The South Africans will still be turning to their replacements to maintain the physical edge the Springboks bring into any test match.

The personnel that Nienaber has selected on the bench clearly indicates that the Bomb Squad has not been defused but rather altered.

Props Steven Kitshoff and Frans Malherbe are among two of the best scrummaging front-rowers on their respective sides of the scrum but find themselves featuring off the bench on Saturday.

The thought process behind the pair on the bench could well be their combination with hooker Malcolm Marx. In the opening game of the 2019 Rugby World Cup, the trio was the starting combination for the Boks with Mbonambi, Mtawarira and Nyakane their replacements. Nyakane's injury in that game ended his World Cup which forced the alteration that had served the Boks well in the Rugby Championship too, to change. Koch joined the Marx-Kisthoff trio while Malherbe replaced Nyakane. Now with Nyakane fit and Ox Nche trusted with filling the boots of retired Mtwawarira, Malherbe rejoins the Marx-Kithoff combination off the bench.

Nienaber confirmed as much saying: "With the quality of front-rowers that we have available, and when we have a discussion with our front-rowers, we almost see them as a pairing," he said.

"Is it more important to start and sing the anthem or to be on the field when the final whistle blows? They know that we work in tandem together and they've got a specific role that they have to play."

"We see our front rowers as a pairing and a unit.

The Bok head coach added that "You could swap the two front rows around and nobody would even raise an eyebrow. That's the best combination we think will serve the Springboks in getting a result, and that's the way we went."

As for the second rowers, Mostert and Snyman were tasked with replacing Etzebeth and de Jager in the latter stages of games during the World Cup. De Jager makes his return from injury via the bench this weekend but Nienaber has ensured that he will still get the impact of two locks off the bench with the inclusion of Rynhardt Elstadt. 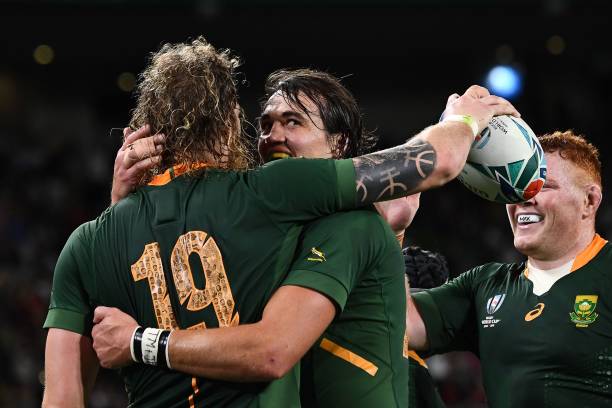 A European double winner with Toulouse, Elstadt has featured mainly on the side of the scrum for Toulouse but started his career as a second-rower with the Stormers and has slotted into that position for both club and country - most recently in the South Africa A loss to the Bulls. Elstadt has a similar approach to the game to that of Etzebeth and Snyman while still being able to play in the back row. Essentially if he is to replace captain Siya Kolisi on Saturday, the Boks would effectively finish the game out with four second-rowers on the pitch (possibly: Etzebeth, de Jager, Elstadt and du Toit).

The other role of the Bomb Squad is to add their influence on the game adding another dynamic to the Springboks approach. While Faf de Klerk is an astute box kicker with a big defensive game, his potential replacement in Herschell Jantjies thrives on attacking ball as to does his halfback partner and namesake Elton Jantjies on the bench. With the latter, the Springboks have the opportunity to close the game out with two flyhalves on the pitch with Pollard potentially shifting to inside centre, a role he has performed for the Boks in the past - notably in the latter stages of the 2018 win over the All Blacks.

While Rassie Erasmus has suggested in the past that he is not one to replace his flyhalf during a game, unless forced through injury, Nienaber could be bringing a different approach to his predecessor.

Finally, Damian Willemse seems to have jumped ahead of Frans Steyn in the pecking order as the Springboks' utility back on the bench. The Stormers' youngster has impressed defensively in recent games against Georgia and the British and Irish Lions but he is certainly an attacking threat too. An injury call up during the 2019 Rugby World Cup, Willemse provides cover at centre, fullback and even flyhalf for the Boks.

In stamping his mark on the Springbok squad, Jacques Nienaber has not defused the 'Bomb Squad' but has rather altered it. We will have to wait to see if it is as explosive.