BoksvLions Preview: Buckle up for the series decider

The result at the Cape Town Stadium this last Saturday lent the third and final Test an enormous amount of significance as the 2021 British & Irish Lions series will be decided then as the Springboks emerged victorious in the second Test, thereby denying Warren Gatland’s charges the honour of snatching the series after their hard-fought victory in the first.


It was another gritty encounter which saw the Springboks make a vast improvement on their second half performance as they brought the hammer down on the visitors with a final score of 27-9.

The Boks gradually strangled the Lions in a slow game with plenty of stoppages and now, for the first time since 1910, the final game will decide the series.

As usual, there was plenty of chat in the press this week; the announcement that Springbok Director of Rugby Rassie Erasmus will face a World Rugby disciplinary hearing was welcomed in some quarters and laughed at in others. Both coaches made changes to their squads from last weekend, the Lions more so than the Springboks.

Gatland tore up the blueprint of his old backline and changed things up, bringing in Liam Williams at fullback and (finally, some might feel) named Josh Adams in his starting XV as well. In the midfield, Bundee Aki is handed a Test start in the inside centre channel while Ali Price earns his second start of the tour, taking over from the experienced Conor Murray in the 9 jersey. 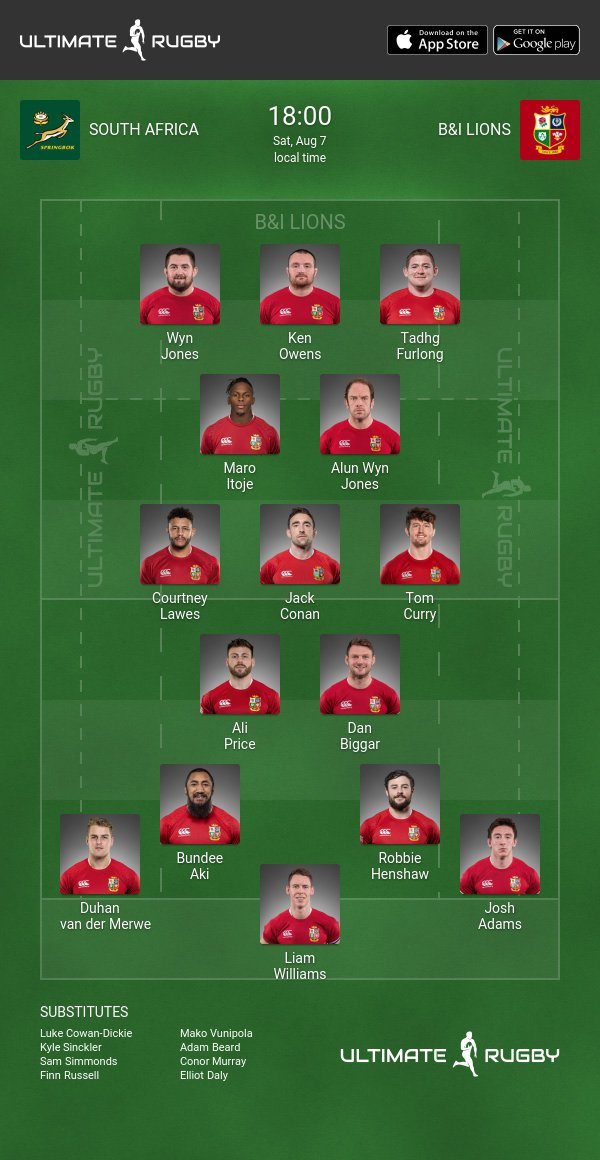 It has been a mystery to a great many Lions supporters that Test selection has eluded Adams who was in blistering, try-scoring form during the warm-up matches. His inclusion (at the expense of Anthony Watson) may be an indication that the Lions are aiming to attack significantly more with ball in hand come Saturday. The selection of Liam Williams makes logical sense as the 30 year-old is one of the finest players under the high ball in the modern game which, against a Springbok outfit with a penchant for kicking the ball, will be a great asset.

In the forwards, two changes to the front row see Wyn Jones moves into the loosehead role while Ken Owens replaces Luke Cowan-Dickie at hooker.

Bench wise, Adam Beard, Finn Russell and Sam Simmonds are brought in for their first taste of Lions Test rugby.

“The matchday 23 have an incredibly special opportunity in front of them – to seal a Lions Series victory in South Africa,” Gatland said.

“It doesn’t get much bigger than this and we’re excited by the challenge that faces us on Saturday.

“We’ve no excuses from last week, the Springboks put us under pressure in the second half and deserved the win. We have to be much better than that second half performance, and I believe we will be.”

The tireless South African workhorse, Pieter-Steph du Toit, will not be involved this weekend due to injury, prompting Head Coach Jacques Nienaber to tinker with the forward pack with the subsequent development of Franco Mostert starting on the blindside flank with the towering Lood de Jager coming in to partner Eben Etzebeth in the second row.

A perpetual thorn in the Lions’ side, Faf de Klerk, will also not be involved on Saturday through injury and his place will be taken by the energetic Cobus Reinach who will enjoy the opportunity of what will be the only Lions Test of his career. 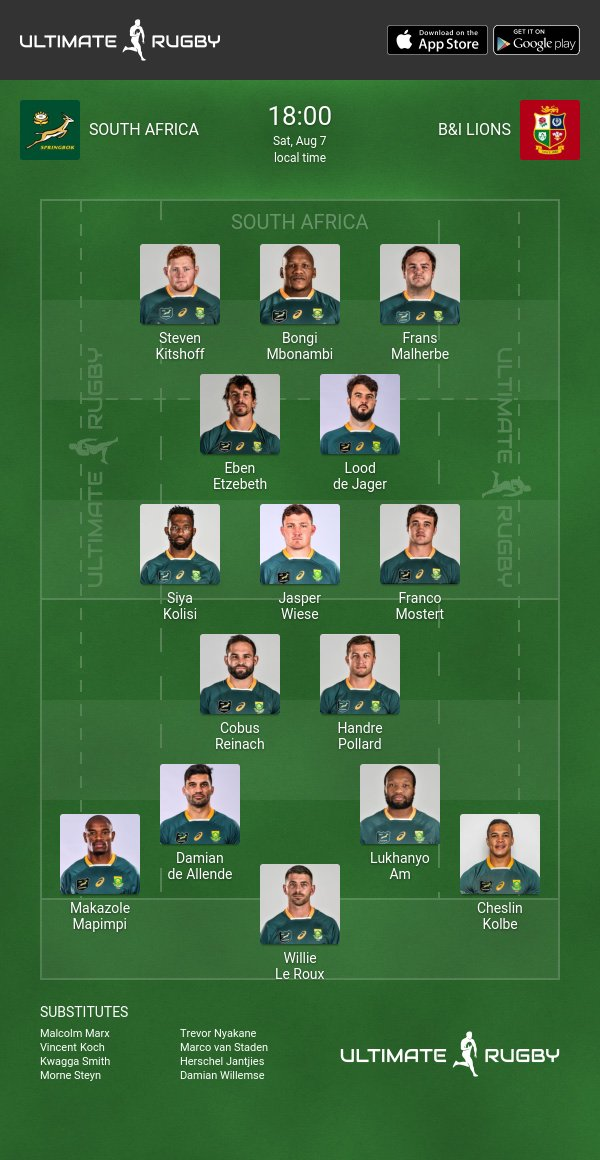 The selection of Reinach is a shrewd one as the combination of himself and Handre Pollard has proved very effective in recent times for Montpellier in the French Top 14.

“This is a massive Test for us with the Castle Lager Lions Series on the line, so it was important for us to maintain consistency in selection following on last week’s performance,” said Nienaber.

“Pieter-Steph du Toit was ruled out due to the shoulder injury he suffered last week, but we are fortunate to have experienced players such as Franco and Lood who can step in and who have the physical presence we need in those roles.

“Cobus is also an experienced player with a calm head and who can handle pressure, and we believe he will be able to dictate play well alongside Handré Pollard, while Herschel Jantjies has been great in adding the necessary spark we need off the bench, and will be asked to fulfil that role again.”

Gatland made special mention this week of the Boks’ apparent tactic of slowing the game down in the second Test, the former no doubt hoping that the practice will not be repeated on Saturday. In a recent press conference, Gatland spoke on the tempo of the match:

"I think there’s two things there,” he said. “One is looking at the ball, and keeping the ball, and also talking to the officials about how we keep the game flowing.

"I think every scrum there was an injury slowing the game down, there were something like 14 minutes of TMO time in the game.

"We’ve worked pretty hard from a conditioning point of view, and it was really, really stop-start. That made it frustrating for us. "Everything at the moment is so stop-start, and it does make it frustrating. I know Alun Wyn Jones was talking to the referee on a number of occasions about keeping it going. We had stud changes, we had TMO decisions, we had the referee stopping the game for cramp.

"That will be one of the things I talk to the referees about this week when we discuss - we need to make sure, we can’t have 60-odd minute halves.

"It’s important we keep that flow of the game, as much from a spectator’s point of view. We want to see some pretty good rugby, and we didn’t see some great rugby played at the weekend.

"It would help, like I said, if players weren’t going down for injuries on a regular basis and stopping. You want that flow in the game and we’ve seen from other games that when we’ve had that tempo we’ve played some really good rugby.

"It was very frustrating for us and particularly for Alun Wyn on the weekend. He was talking to the referee on a number of occasions asking him to speed up and you could hear the ref through his ‘mics’ as well encouraging both teams to keep the flow of the game going because it was so slow. Yeah, we definitely want some tempo. "With a team going with a 6-2 split as well and just how long the halves have been, how little minutes in play we’re actually getting. It’s definitely not something to our advantage and we need to work on that and make sure that we keep up that tempo this weekend."

As things stand, this Test series will not be remembered for the rugby, which has, unfortunately, been lacking flair and buzz while being somewhat overshadowed by the off-field sideshows. All Black Head Coach Ian Foster made comments suggesting that the players have been overcome by the magnitude of the Lions series and have thus retreated into their shells, playing ‘safe’, kicking rugby.

However, the is still another 80 minutes of this series left. The fact that it will probably reach conclusion is remarkable in itself, having prevailed over the vicious grip of the Covid-19 third wave in South Africa. In light of this, perhaps it is not unreasonable to suspect that the flair of these players could, in the same way, overcome any inhibitions and lend the series some of the striking flavour it deserves.