The Chiefs have confirmed their squad for the 2021 Super Rugby Aotearoa season and Trans-Tasman competitions.

With Warren Gatland working with the British and Irish Lions, Clayton McMillan will take over the top job at the Super Rugby franchise and the new boss has assembled a strong and experienced squad, featuring a selection of talented All Blacks, Māori All Blacks and Moana Pasifika players.

"I’m really pleased with the squad we have assembled. It has a good balance of youth and experience, hard workers and x-factor players, and will be ably directed by some outstanding leaders. A good percentage of the squad will be entering their second and third campaigns. Their previous experience at this level and the lessons learned will equip them well for the challenges ahead. There will be no lack of motivation to succeed,” said McMillan.

Prop Sione Mafileo joins the Chiefs having debuted for the Blues in 2015.

There are six new additions to the Chiefs forward pack for the 2021 season. Powerful tighthead prop Sione Mafileo is no stranger to Super Rugby, debuting for the Blues in 2015 against the Crusaders. Mafileo brings with him a wealth of experience following a solid Mitre 10 Cup campaign for North Harbour.

Joining Mafileo in the front row stocks will be Waikato loosehead prop Ollie Norris, who was called into the Chiefs 2020 squad as an injury replacement player and later debuted for the side against the Crusaders. This will be the 20-year-old’s first Super Rugby contract.

20-year-old Tupou Vaa’i, a product of Wesley College, burst onto the scene in his Super Rugby Aotearoa debut against the Highlanders, after being called into the Chiefs squad as an injury replacement. The physical lock impressed and earnt selection for the All Blacks leading to his debut against Australia. The Taranaki lock will be joined by fellow teammate Josh Lord in their rookie year. The towering 2.02m lock has had a stellar campaign for the Taranaki Bulls and the 19-year-old is set to be a promising prospect for the future locking stocks of the Gallagher Chiefs.

Former New Zealand Under 20 representative Simon Parker will return for the Chiefs this season following his debut against the Crusaders in 2020. Having previously played for the New Zealand Secondary Schools in 2018 and New Zealand Under 20s in 2019, Parker is a physical loose forward with a direct style of play and has been an effective player for Waikato. Five exciting backs will join the 2021 squad. Following a successful Mitre 10 Cup campaign for Waikato, halves combination of Xavier Roe and Rivez Reihana will be hoping to debut for the Chiefs in their rookie season. Roe is a product of Hamilton Boys' High School and represented the New Zealand Under 20's in 2018, before making his Mitre 10 Cup debut for Taranaki later that year. Shifting to Waikato for his 2020 season, the starting halfback held outstanding form during Waikato’s Mitre 10 Cup campaign.

Reihana is an astute goal kicker and has been an impressive player for Waikato, scoring 31 points for the province since his Mitre 10 Cup debut in 2019. The former schoolboy star and New Zealand Under 20’s representative will be joined by Bryn Gatland who returns home from the deep south. 25-year-old Gatland had an impressive Mitre 10 Cup campaign with North Harbour, finishing as the competition’s leading points scorer with 119 points. Māori All Black first-five eighth Kaleb Trask will complete the side’s pivot roster.

Bay of Plenty’s Chase Tiatia will return to the Chiefs after first debuting for the side against the British and Irish Lions in 2017. The exceptional counter attacker made his Super Rugby debut for the Hurricanes in 2019 against the Brumbies. Tiatia has been an integral part of the Bay of Plenty team under the guidance of McMillan.

Hawke’s Bay’s Jonah Lowe will join Tiatia in the move north from the Hurricanes. Lowe brings a physical approach to the game, capable of playing on the wing or at centre he is known for his try scoring ability. Exceptional for the Magpies in this year’s Mitre 10 Cup Championship Final, he scored two tries in the teams’ 36-24 win over Northland. Lowe made his Super Rugby debut for the Hurricanes against the Crusaders in Christchurch in 2018.

One player is still to be named to complete the 38-man 2021 Chiefs squad. 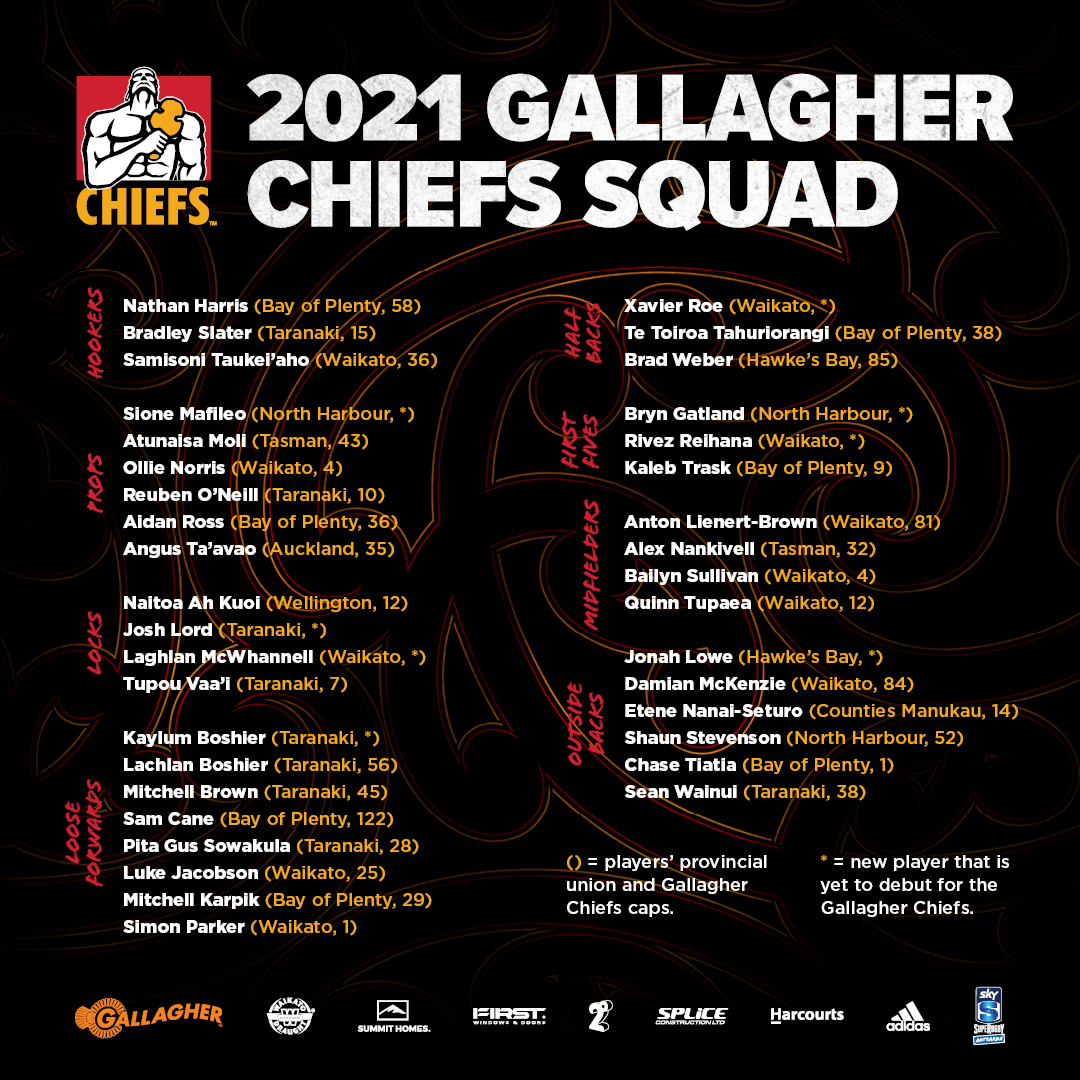