Chris Ashton at fullback for Quins trip to Kingsholm

Harlequins travel to Gloucester in the search for back-to-back wins at Kingsholm Stadium, having claimed a 28-15 win in round 20 of the 2019/20 season earlier this year.

Number eight Alex Dombrandt leads the side once more with regular Club captain Stephan Lewies narrowly missing out through injury, with the back row having captained Quins during a record-breaking 49-29 victory over Northampton Saints at Franklin’s Gardens last weekend.

Returning to fitness, Ashton starts at fullback in place of the rested Mike Brown, alongside wingers Cadan Murley and Nathan Earle, in an otherwise unchanged backline from the side that travelled to Northampton.

In the pack, flanker James Chisholm is rotated into the side at blindside having featured from the bench last time out, with Tom Lawday rotating into the side’s Impact Players this weekend.

Also amongst the Impact Players, Samoa international hooker Elia Elia returns to the matchday 23 having served a suspension for receiving a red card against Wasps towards the end of the 2019/20 season.

Commenting ahead of this weekend’s fixture, Sunday December 7, 16:15 kick-off, Gustard said: “A trip to Kingsholm is always a great place to play rugby. Gloucester have a lot of talent, a lot of good players, and we’re very much looking forward to facing them on Sunday.

“Stephan Lewies just misses out on selection this time around due to injury. In his absence, we felt that Alex [Dombrandt] did a magnificent job captaining the team in a good performance last weekend against Northampton Saints, so he will once again wear the captain’s arm band.

“James Chisholm is rotated in at six for the outstanding Tom Lawday, who moves to the Impact Players on rotation as James continues his rehabilitation from the injury that ruled him out of the final two games of last season.

“It’s great to see Chris Ashton, like James, return from injury this week. We’re looking forward to seeing him play in the absence of one of our standout performers last week in Mike Brown, who is rested this week against Gloucester.” 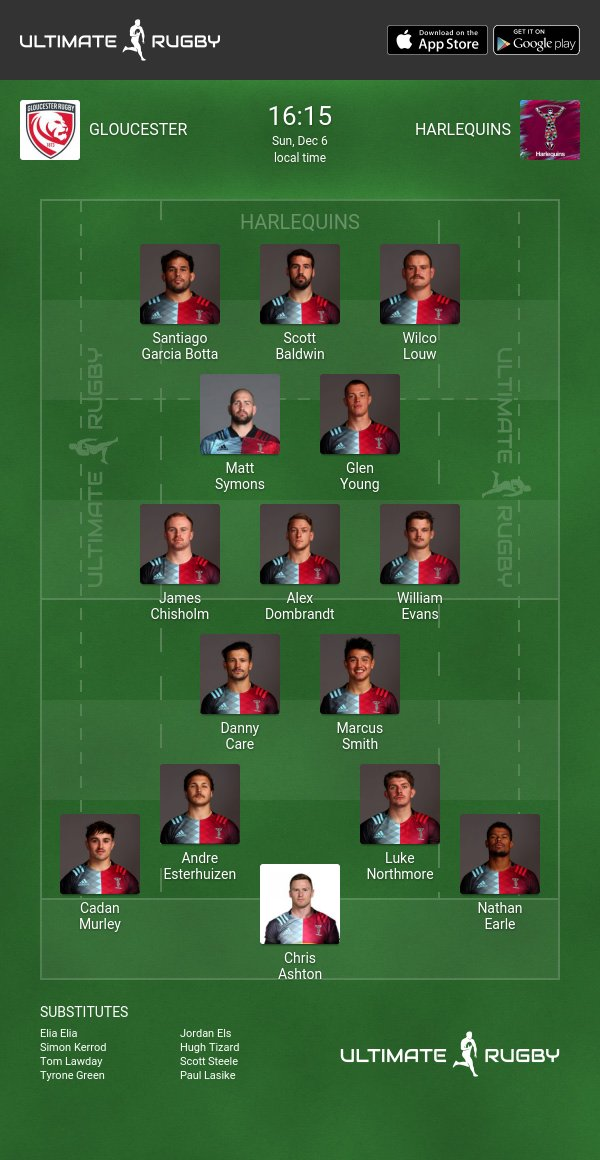 Unavailable due to injury: