A returning Crusader, a local boy done good, and a few fresh out-of-towners – here’s your first look at the Crusaders squad for 2023. These boys will represent the club and the history of the franchise when they take the field this year, on the hunt for points and trophies.

The 38-strong playing group are made up of familiar faces and some brand-new talent, assembling at Rugby Park in Christchurch in early December, all set for their first fixture on 24 February at Orangetheory Stadium in Christchurch.

Exciting news for Canterbury fans is the full contract awarded to hooker George Bell. The 20-year-old (turning 21 less than a month before the Crusaders first game of the season) has been on the road to Super Rugby selection since joining the Crusaders Academy. His performances for Canterbury in the NPC in 2022 impressed selectors and fans alike.

Equally promising is first five Taha Kemara, a Waikato local in his second year out of high school who’s plied his trade so far with Waikato in the NPC. The 19-year-old has been on the Crusaders radar for some time and his move south brings depth and youth to the squad.

Long-time Crusaders fans will recognise the name Willi Heinz from his time playing in the red and black from 2010-2015, and the team is excited to welcome him back into the fold in 2023 as half back. He shot over to England to play for Gloucester and the Worcester Warriors before earning a birth-rite spot in the England national team in 2019 and winning 19 caps at international level – including facing the All Blacks at the 2019 Rugby World Cup in Japan.

Samoan international and former Blues player Melani Nanai returns to home soil for a stint as outside back with the Crusaders after spending the last few seasons with the Worcester Warriors in the UK. Keen watchers will remember his 64 caps for the Blues between 2015-2019.

Wellington local Pepesana Patafilo joins the red and black after making his Super Rugby debut with the Hurricanes in 2021. The outside back made four appearances for the Samoa U20 side in 2015, and impressed with his foot work and speed on Wellington’s way to their first NPC title in 22 years.

Scott Robertson, Crusaders Head Coach, said the 2023 squad represented a mix of old and new talent and was feeling confident ahead of the season kicking off in February.

“We have a good balanced squad this year, with some seasoned veterans and an incredibly hard-working new crew of Crusaders,” Robertson said.

“I’m proud of the group we’ve put together this season, and I know they’re all ready and excited to represent the Crusaders region on the big stage.”

Colin Mansbridge, Crusaders CEO, said the coaching group was stacked with exceptional people and “New Zealand’s, if not the world’s most successful club coach”.

“The management and medical group are immensely professional and caring, and we all work hard together to deliver a positive and hardworking culture – winning rugby is just the result,” Mansbridge said.

“The mixture of enthusiasm and experience in the squad is great and we can’t wait to see the growth of the group.” 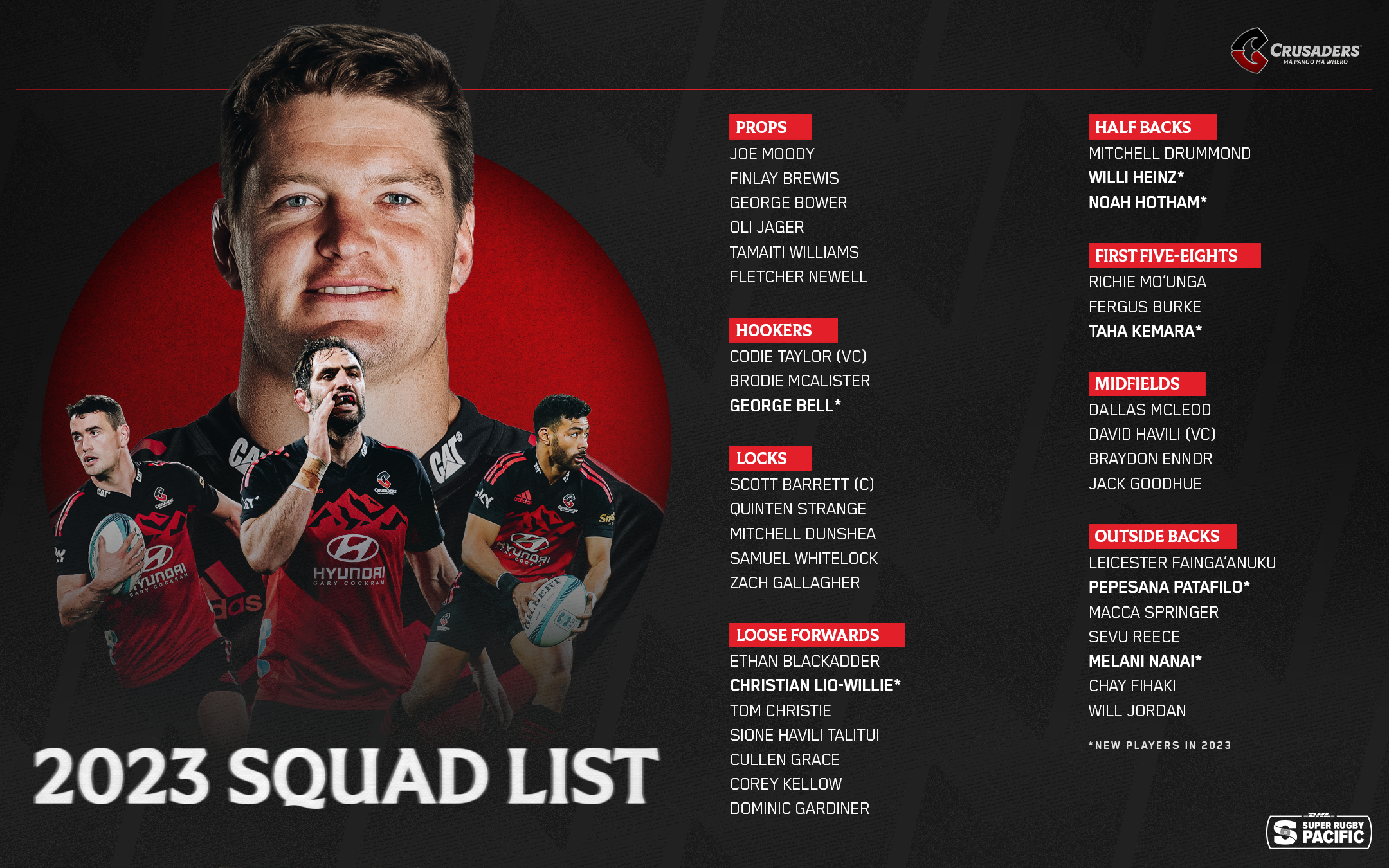