One of the oldest cliches in rugby is that it is 'a game for all shapes and sizes' and while the professional game has seen players become bigger and stronger over the years, the quarter-finals of the Champions Cup and Challenge Cup proved that no matter your shape or size there is a place for you in the game.

While hulking athletes and fleetfooted stars light up the NFL, skilful and speedy footballers shine in Europe's top leagues and the leanest runners battle it out for gold in the Olympics, there is no sport quite like rugby that has athletes of all types taking the field at the same time.

The shapes and sizes of players over the years has proved the old cliche right with the likes of George Gregan and Joost van der Westhuizen playing the same position while the same could be said of Shane Williams and Jonah Lomu as well as Matt Giteau and Mathieu Bastareaud, however, the more professional the game has become the more it has looked as if these examples would less prominent.

But the quarter-finals of Europe's top two competitions was a timely reminder that there is still place for your extreme athletes, massive props, small backs, towering locks and tireless forwards.

Toulouse winger Cheslin Kolbe dazzled against Ulster and stole the headlines for his incredible footwork, speed and power all packed into 1.71 metre tall and 74 kg frame. On the other end of the spectrum two of Saracens' massive South Africans put in match-winning performances against Leinster with 1.97m, 114kg flanker Michael Rhodes and 1.85m, 118kg prop Vincent Koch guiding the side to victory.

Built like the modern-day blindside flanker, Rhodes carried his 114 kg body around the Aviva Stadium with vigour and got through a mountain of work in the rucks, on defence and was a solid option at the lineout grabbing three throws. Koch had a similar impact on defence racking up 15 tackles, without missing, while his and Mako Vunipola and Jamie Goerge's efforts in the scrum saw Saracens win eight penalties at the set-piece. 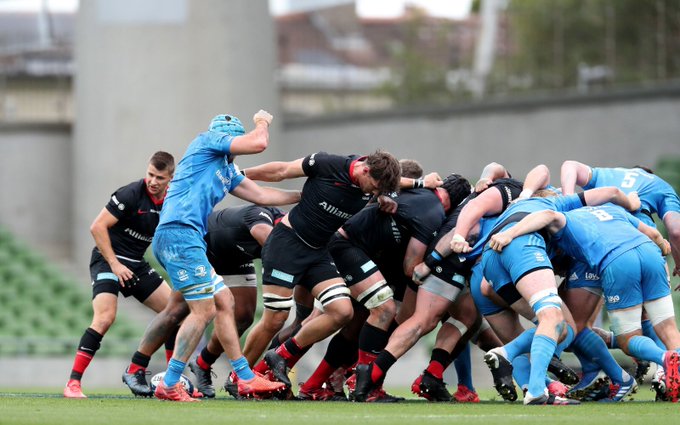 Saracens' dominance in the scrum against Leinster showed us that there is still a place for tough scrummagers in the professional games that pride themselves on their ability to assert themselves in the set piece.

Cheslin Kolbe showed off an array of skills in his blockbuster game against Ulster. The World Cup winger brilliantly stepped past Jacob Stockdale to score two tries while also bumping off centre Stuart McCloskey, who outweighs Kolbe by 37 kgs, and was even lifted to grab a restart by Jerome Kaino.

It wasn't just the South African's who stood out in the quarters with Scotland's pocket rocket Darcy Graham starring for Edinburgh despite their loss with his opposing number Santiago Cordero enjoying similar success.

Standing at 1.78, the Scotsman weighs in at just 84kgs. Like Kolbe, Graham showed how impactful the smaller players on the pitch can be as he weaved past four Bordeaux defenders in a 6-metre space to brilliantly set up a try for Damien Hoyland.

While the pocket rockets shone, there was still space for the extreme athletes to shine and none more so than Bristol's star man Semi Radradra. At 1.88m tall and weighing 105kgs, Semi Radradra's speed, acceleration and overall skill makes him a freak of nature. His freakish skills were on display as Bristol breezed past the Dragons with Radradra playing a major role in the win.

This is becoming a weekly post... Semi Radradra had another storming game for the Bristol Bears 🐻 #ChallengeCup

Speaking of freak of nature Fijians, Bill Mata also showed off his extreme athleticism by coming out of nowhere to chase down Bordeaux's big winger Ben Lam.

Those kinds of try saving hits have become somewhat of a norm for Mata who still offers more to Edinburgh.

Back to the English clubs, Northampton's Manny Iyogun made his European bow with the converted front-rower shining in his side's defeat to Exeter. Iyogun's transition into the front row was based on his shape with Saints scrum coach Matt Ferguson saying: “If we can say, a rather large rear. Which is what excited me about him.”

Toulouse scrumhalf Antoine Dupont also shone in his side's victory with the 1,74m tall halfback continuing to show that he is one of the best players in the world with his sheering pace and accuracy off the boot and with his passes.

While we may know that the cliche that rugby is 'a game for all shapes and sizes' is true, it's always great to be reminded of the fact especially when it is wrapped perfectly into one weekend's worth of action.