It is a contest that has been in the minds French and South African rugby fans for many months already and is set to finally materialise at Stade Velodrome in Marseille on Saturday evening.

The Boks will not take the field with the confidence they would have liked after falling to Ireland 19-16 in a messy affair in Dublin last weekend.

Meanwhile, Les Bleus managed to put away the Wallabies by the smallest of margins in Paris:


The major talking point regarding the Springbok camp is that Stormers and Former SA Under-20 flyhalf Manie Libbok has been included on the bench and is thus in line to make his international debut.

Willie le Roux will slot back into the starting team at fullback, which sees Cheslin Kolbe move to the right wing and Kurt-Lee Arendse to the left wing, while Makazole Mapimpi has been named among the replacements. The other change in the backline sees Faf de Klerk start at scrumhalf in place of Jaden Hendrikse.

Nienaber also made changes to his forward pack, with tighthead prop Frans Malherbe packing down in a new-look front row next to Ox Nche (prop) and Bongi Mbonambi (hooker), while Franco Mostert makes the jump from the bench to the starting lineup to fill the void left by injured lock Lood de Jager.

Other changes amongst the replacements – where the uncapped Libbok has been named in the matchday squad in a Test for the first time – include Cobus Reinach, who will provide cover at scrumhalf, as well as Steven Kitshoff (prop), Malcolm Marx (hooker) and Marvin Orie (lock). Nienaber opted for a split of five forwards and three backs on the bench for this Test.

“One of the changes was injury enforced as Lood suffered a shoulder injury against Ireland, while we opted to make a few tactical personnel changes for the challenge that we expect France to pose,” said Nienaber.

“We know what each of the players in this squad can do, and we thought these combinations fit this specific game.

“A guy like Cobus will also bring a different dimension to our attack, and it a bonus that he knows the conditions in France and has also played with some of their players.

“Manie, meanwhile, has showed his big match temperament in the Vodacom United Rugby Championship and he has been training well since joining the team, so if he gets a run, it will be a great occasion to make his Test debut. It is going to be a challenging game, but it doesn’t get better than playing against the second ranked team in the world on your debut.”

Nienaber expected a big onslaught from the French and said this would be a good test for the team with an eye on next year’s Rugby World Cup, which will be hosted in France.

“France have showed in the last year what a force they can be, and they come off a morale-boosting victory against Australia, so we know we are in for,” said Nienaber.

“Facing France, who are ranked second in the world, on their home patch at what we expect will be a full stadium is great preparation for next year, as the players will experience first-hand what they are in for.

“We will also be playing at this stadium during the World Cup, so this match will be good for us in many ways.”

Looking at the threat France could pose, Nienaber said: “They have a good pack of forwards who pride themselves on their set pieces and talented backs who can spark something from nothing, so they will test us all around.

“That said, we know what our players are capable of, and if we had capitalised on more of our opportunities against Ireland we could have been on the right end of the scoreboard. The reality is that we lost against the best team in the world at home in front of a capacity crowd by three points.

“We’ve spoken about what went wrong last week and we are working hard on rectifying those areas so that we can we play our potential and make the nation proud this weekend.” 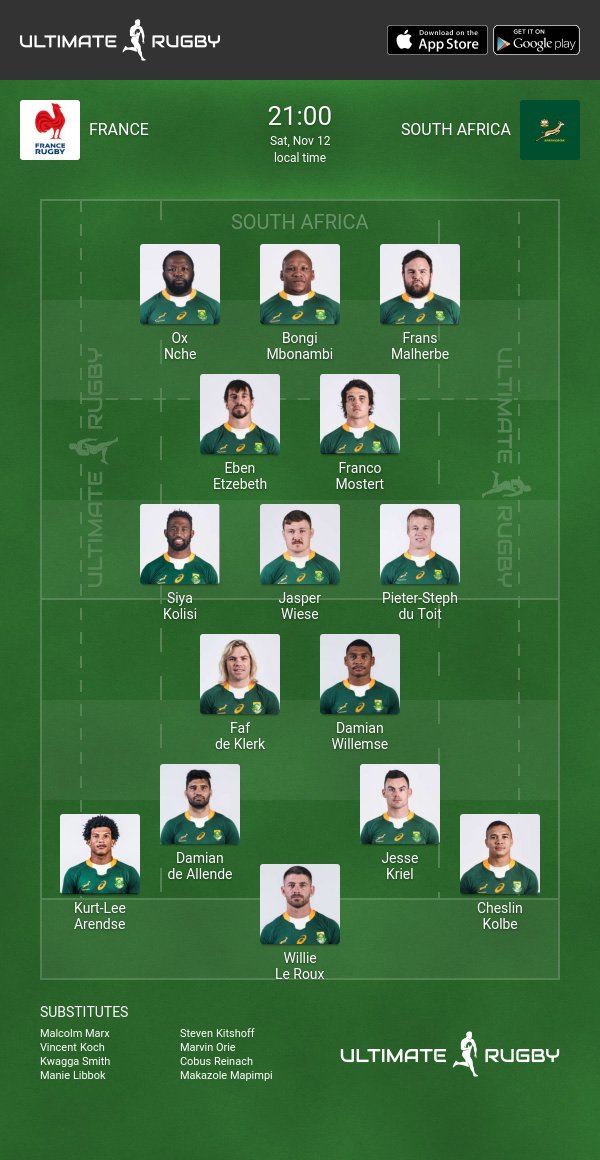 The French will lock horns with the Boks unchanged from last weekend and hungry to extend their unbeaten stretch to 12 matches.

"Even when it's hard, and against Australia we had moments where we were under huge pressure, we find solutions. South Africa is another team but we know we have these resources," said Galthie.

"What matters is our capacity to be composed and get those winning movements like we did last Saturday.

"South Africa are a formidable team, that's all we can say for now." 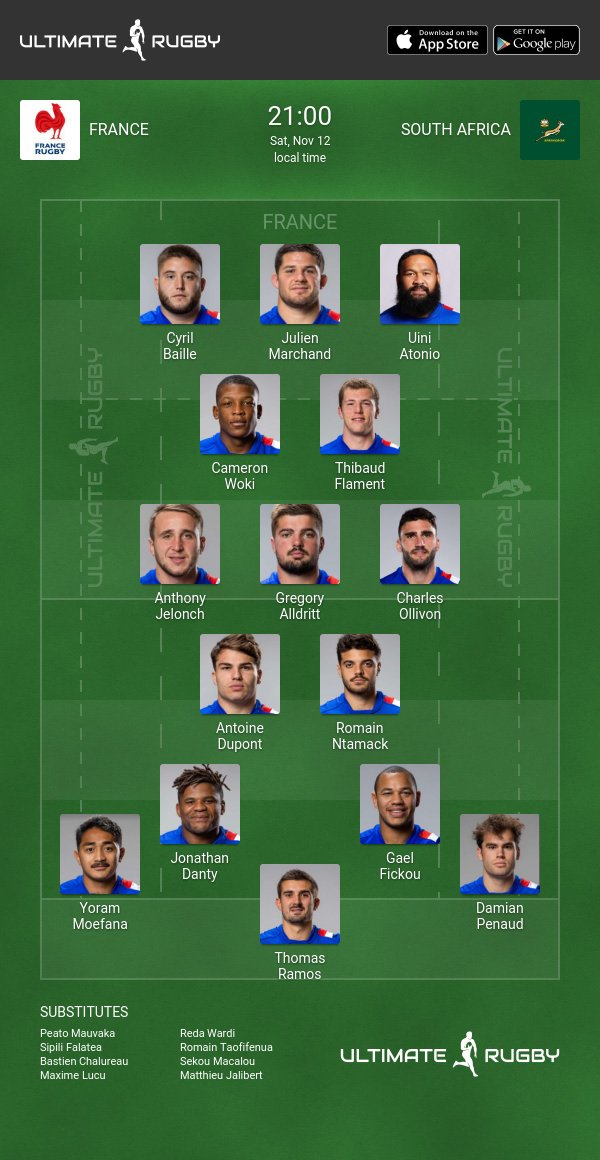 The last time the teams met was back in November of 2018:

The Springboks have managed to win the last seven Test matches between them and Les Bleus – a stat which will no doubt add fuel to the latter’s tank come kick-off.