How things stand after Round 1 of Super Rugby AU

Super Rugby AU finally kicked off this past weekend with the Reds taking on the Waratahs in Brisbane while the Brumbies hosted the Rebels in Canberra.

The Reds pulled off a rare victory over their Sydney rivals, outscoring them by four tries to two.

The Brumbies looked in great form as they despatched the Rebels 31-23, the former taing their place at the top of the table on points difference. 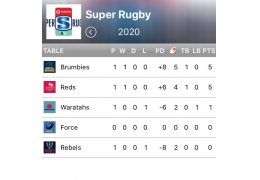 Round 2 sees the Rebels taking on the Reds in Melbourne while the Force will commence their first game of the season against the Waratahs in Sydney.


The Brumbies, who enjoy a break in Round 2, look to be the team to beat in the competition, if the first round is anything to go by.

Top Stats Performers From Round 1: