How Things Stand After Round 6 of Super Rugby AU

Round 6 offered two intriguing results as the Rebels and the Waratahs got their own back against the Brumbies and Reds respectively after the former two teams were defeated in Round 1 by the latter. The result is that the Rebels are now on the hunt for the top spot on the table, just four points behind the Brumbies.

The Waratahs’ resounding victory over the Reds (45-12) puts them in third spot, tie on overall points with the Reds.

The Western Force have struggled in the competition thus far, having been unable to post a win from four encounters. They will have an opportunity, however, to rectify that in Round 7 when they take on the Waratahs. Based on the form of the men from Sydney this last round, though, it seems unlikely that the Force will emerge victorious. 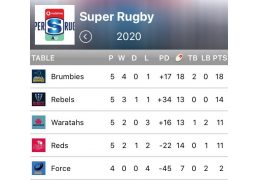 The ‘Tahs were led this week by Michael Hooper and hit the ground running with a fantastic first half performance from which the Reds found it impossible to recover.

Meanwhile, in Melbourne, the Rebels looked impressive as they trounced their Brumbies rivals with a dominant showing. The Rebels will face the Reds in Round 7 and will fancy their chances of taking 5 points from the game in front of their home crowd and, since the Brumbies will enjoy a bye, could find themselves in pole position if they do.

The Reds, frankly, looked somewhat shell shocked in the face of the onslaught enacted upon them. They have shown, particularly in the early rounds, that they can be effective when consolidation yields control of the game in their favour.