Looking ahead to Round 3 of The Rugby Championship

The 2022 Rugby Championship enters its third round this weekend and, as things stand, it is Los Pumas leading the pack, thanks to their big win over the Wallabies on 13 Augus. The latter hold second spot while the Boks and All Blacks occupy third and fourth positions respectively.


This weekend, the Boks lock horns with the Wallabies in Adelaide and will be motivated in no small way by the fact that they have not won on Australian soil since 2013.

Springbok boss Jacques Nienaber has made minor changes to the team which fell to the All Blacks in Johannesburg nearly a fortnight ago: 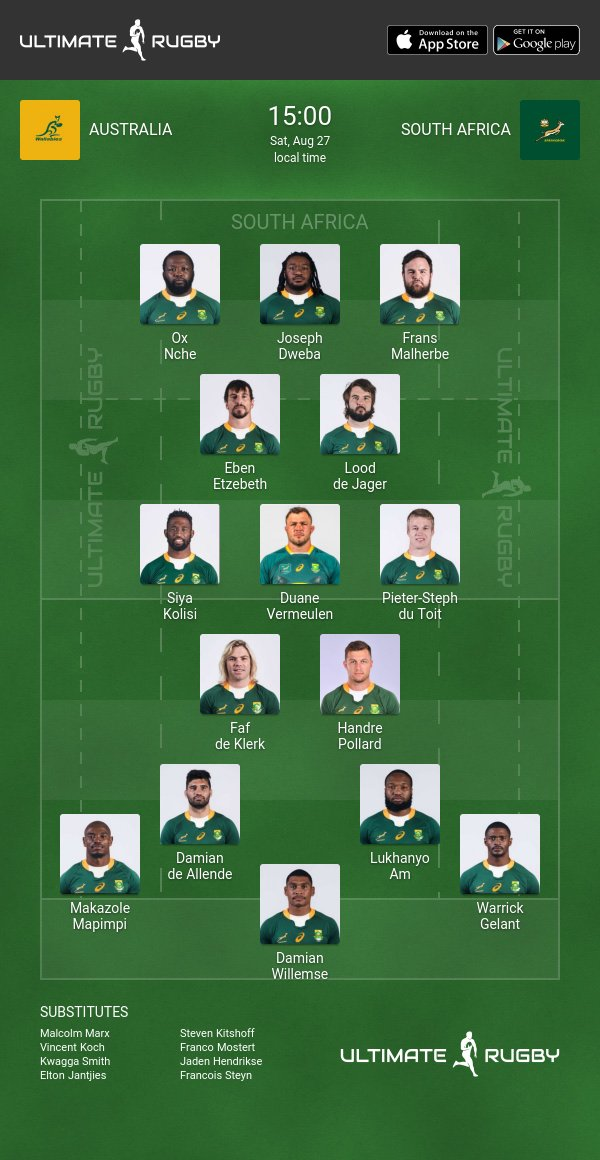 Warrick Gelant takes over from Jesse Kriel on the wing, while Faf De Klerk has completed his return to play protocol after missing the second Test against New Zealand due to concussion and slots in for Jaden Hendrikse.

Nienaber also made three changes to the replacements bench, which features a split of five forwards and three backs, where Hendrikse takes over from Herschel Jantjies, while Elton Jantjies will provide flyhalf cover and Frans Steyn additional cover at the back. Willie le Roux and Jasper Wiese are not in the match-23 this weekend.

“This is a very important clash for us to set the tone for our Castle Lager Rugby Championship tour and we feel that continuity in selection is important to build momentum in our campaign,” said Nienaber.

“Warrick was in good form for the DHL Stormers earlier this season and he has been working hard at training, so we thought it would be good to give him a run on the wing. He also combined well with Damian Willemse in the Vodacom United Rugby Championship, so we are excited to see what they offer us in the match.

“Faf, meanwhile, is back from concussion and his experience will be important in this game.

“We also feel it is important to give the likes of Ox (Nche), Joseph (Dweba) and Duane (Vermeulen) another opportunity to further build combinations and give them valuable game time as we build toward the Rugby World Cup next year.”

Of the decision to switch from a six-two to a five-three split on the bench, Nienaber said: “We looked at what Australia will bring to the game, and that combined with our need to give Elton and Frans Steyn some vital game time, prompted us to select five forwards and three backs on the bench.

“With Franco (Mostert) and Kwagga (Smith) on the bench, we will have cover at lock and looseforward, while Frans Steyn’s versatility will also be handy as he can cover centre and fullback. These changes obviously mean that Willie, Jasper and Herschel lose out, but we know what we have in them and what they bring to the team.”

Nienaber expected a big onslaught from the Wallabies who will be equally determined to bounce back from their defeat against Argentina and said: “Australia are always a tough force at home and the fact that we haven’t beaten them here since 2013 is evidence of that.

“Much like us, they will also want to bounce back after going down against Argentina, so we expect them to come out firing. The fact that this will be the first Test between the teams in Adelaide will serve as extra motivation for both teams this weekend, so we are preparing for another epic encounter against them.

“We had a thorough review of our last match against New Zealand, and we have identified the areas of our game in which we need improve. We know we need to make a big step-up in the quality of our performance to start the tour on a positive note, and that is a big objective for us this weekend.”

Wallabies boss Dave Rennie has identified his team’s starts as a problem area of their game and, after much work on the training pitch, now expects his troops to hit the ground running.

“We haven’t started well enough, that’s an issue for us and we’re look at what we’re doing there,” he told the Sydney Morning Herald.

“How we’ve prepared them and ensuring that we’re doing every little thing to make sure we’re ready to go on Saturday.

“We’ve got an outstanding staff and, if you ask the players, they’ll say they’re being well catered for. But you can’t abdicate responsibility when you get a result like that.”

Of the recent series against Eddie Jones’ England and the road forward, Rennie said:

“Ideally we win an England series and we’re in a solid position in the Rugby Championship. It’s disappointing, but we’ve got to look forward,” he said.

“We get a bit of ammunition back this week, it’s going to help.

Rennie has made six changes to the side which fell to the Pumas in Round 2: 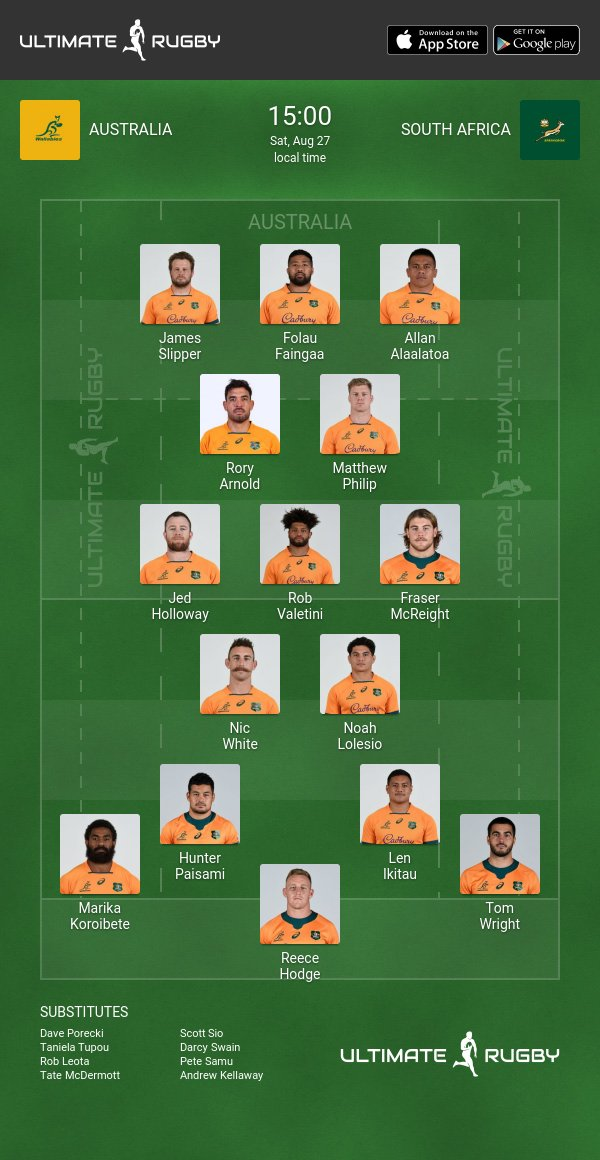 57-Test capped Reece Hodge returns to the starting line-up at fullback with Tom Wright shifting back to the right wing and Marika Koroibete on the familiar left edge for the match which forms part of the eToro Rugby Championship.

After returning to Australia early from Argentina for a family bereavement, Allan Alaalatoa will start in the front row at tighthead prop alongside hooker Folau Fainga'a and club teammate James Slipper who plays his 120th Test.   Slipper will also continue to captain the side this weekend.

Rebels stalwart Matt Philip's experience has been called upon, named in the run-on second row pairing alongside Rory Arnold who made his first appearance in the gold jersey this year, in the side's last outing in San Juan.

The backrow remains unchanged for the third consecutive week with Jed Holloway continuing his impressive start to his Test career at blindside flanker. He'll combine with Fraser McReight who is selected at openside flanker and Rob Valetini who will wear the number eight jersey for the 16th consecutive Test.

The experienced Nic White will again be the starting scrumhalf, partnering Brumbies teammate Noah Lolesio who will play his first Test against the Springboks on Saturday afternoon.

Queensland inside centre Hunter Paisami is another who returns to the starting team, reigniting his midfield combination with the fleet-footed Len Ikitau who will wear the number 13 jersey.

“It's great to have a number of experienced players back in the mix this weekend,” Rennie added.

"We understand that respect is earned daily and we get an opportunity to earn it against the current World Champions on Saturday afternoon.

"It's really motivating to be back at home in front of our supporters, especially in Adelaide, a place we haven't played at in 18 years."

Meanwhile, the All Blacks once again have the heavy weight of expectation on their shoulders as they seek to back up their victory over the Boks at Ellis Park against an Argentinian team which is looking dangerous at the minute.

Sam Cane and his troops wowed a global rugby audience when they bounced back against the Boks after tasting a heavy defeat the week before. However, according to Cane, their work is never done.

“It’s just the start of where we want to get to,” Cane said.

“We’d been saying for a couple of weeks: we’d been improving and we then took a significant step in that game [against South Africa],” he added.

“It’s one performance. Just because we got that one right doesn’t guarantee we get this one, so there’s plenty of work to do.

“For us, it’s a good stepping stone.”

Of their opposition this weekend, Cane said the following:

“They’re one of the best defensive sides in the world when they get it right.

“They’ve got some exciting backs with exceptional footwork,” he added.

The only change to the All Black squad that did duty against the Boks at Ellis Park sees Stephen Perofeta come onto the bench for the injured Beauden Barrett. Should he take the pitch, it will be Perofeta’s first international cap. 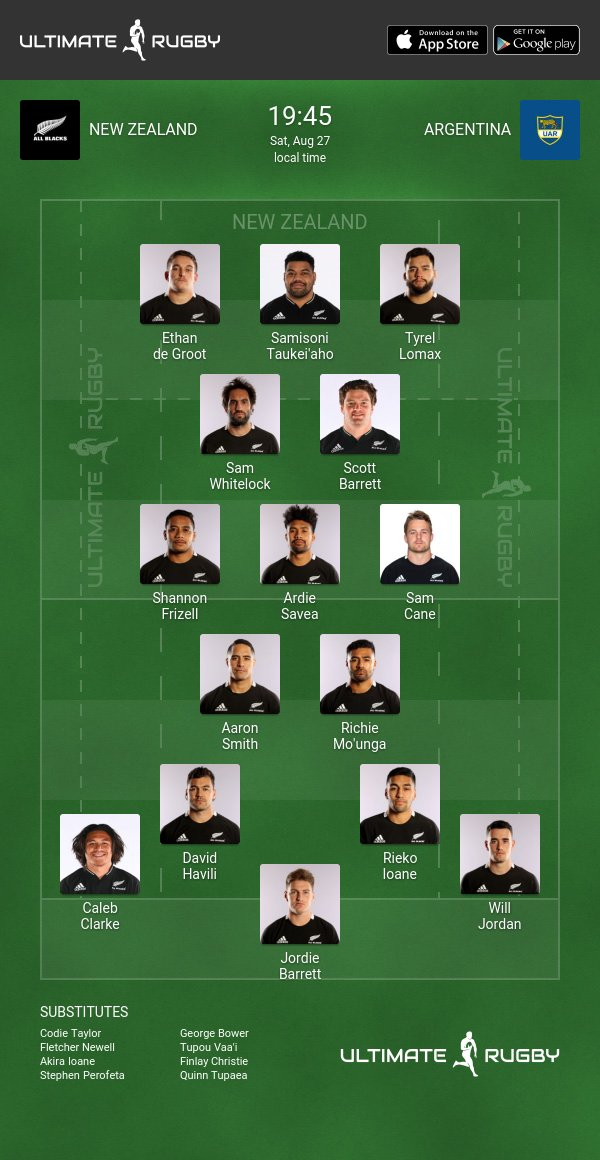 “I’m delighted that he’s been given a chance because he’s been training really well,” Foster said on SENZ’s The Run Home.

“I love his journey to the All Blacks; he came through the U20 program and then I thought he just struggled a little bit the first couple of years at Super level.

“But he persevered and kept working on his game and I think we’d all agree that he’s had a lot of composure this year at 10 and at 15.

“He’s been sitting there, learning a lot from Richie and Beaudy, and the chance to make the 23 is pretty special for him.”

Argentina have made three changes to the starting XV which dealt the Wallabies a 7-try thrashing in the previous round; at tighthead, Gomez-Kodela makes way for Joel Sclavi in the only alteration to the pack while, amongst the backs, Matias Orlando takes over from Jeronimo de la Fuente at inside centre and speedster Juan Imhoff hands the number 11 jersey to Lucio Sinti. 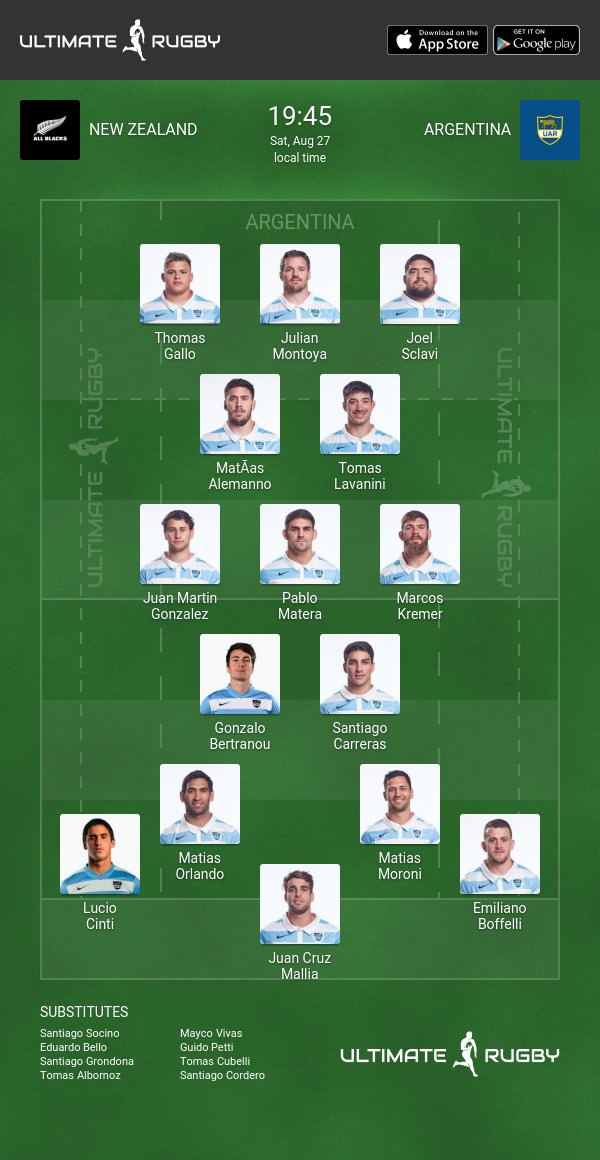