Leaders Leinster showed commendable character, coming from 19 points down to secure a bonus-point victory over Ulster in a thrilling top-of-the-table contest in the BKT United Rugby Championship at the RDS on Saturday night.

The outcome looked highly unlikely when Ulster took control to carve out a 22-3 lead at the break before Garry Ringrose’s brace led to a five-try blast.

Stuart McCloskey’s inaccuracy at the breakdown opened the door for Ross Byrne to slot a penalty in the third minute.

But, Ulster came to play, Tom Stewart streaking through the line to suggest danger and pressure from Martin Moore caused a scrum penalty which John Cooney seized on to level it up in the tenth minute.

The chasing speed of Ryan Baird and the follow-up blockdown of James Ryan kept Ulster pinned back.

A Leinster power-surge at the scrum and Garry Ringrose’s tracking of James Hume to cause a knock-on were countered by pressure from Marcus Rea to secure a turnover.

Flanker Baird’s demolition of Stewart Moore preceded a period of kick-ball which Leinster won by virtue of having the wind in their sails.

Then, the officials had a second look at a Cian Healy hit on Stewart, resulting in the Ireland prop’s red card for a lack of mitigation in a head-on-head challenge. 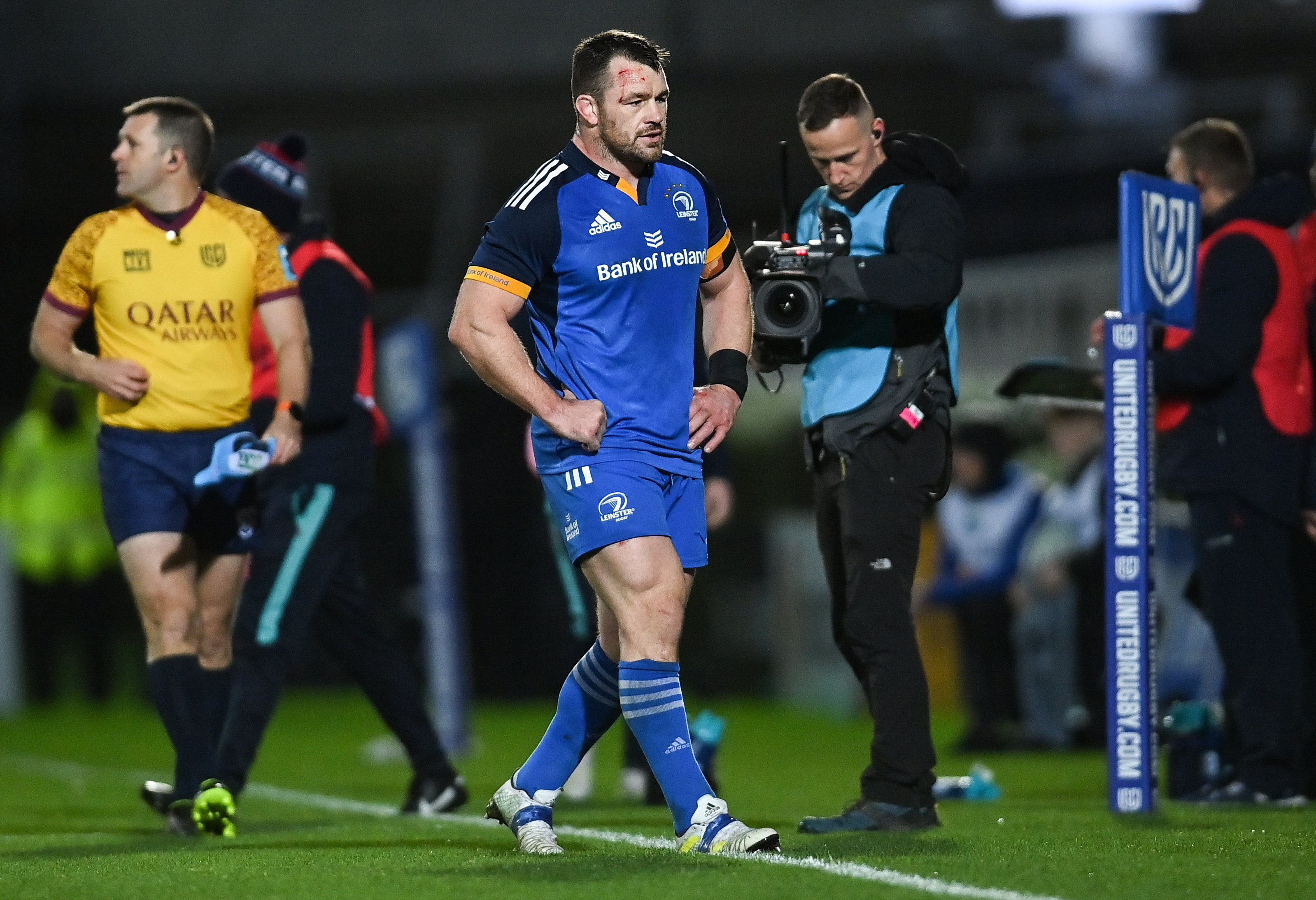 Immediately, the Ulster lineout throw from Rob Herring to Kieran Treadwell made enough inroads for Herring to hammer home the advantage, Cooney converting for 10-3 in the 23rd minute.

The introduction of Andrew Porter for Healy happened ahead of the Ulster maul being activated again, Treadwell eventually powering over from close range for Cooney’s conversion to make it a 14-point lead on the half-hour.

A series of Leinster phases produced frontfoot ball until Stuart McCloskey’s work in contact yielded a turnover which the Ulster backs exploited brilliantly.

Stewart Moore timed the pass to perfection in releasing Ethan McIlroy to stroll home from 48 metres for 22-3 in the 36th minute.

Despite a searing break by Jamie Osborne, Leinster were not able to press home the advantage.

A high tackle produced one last chance from a lineout, Leinster’s maul moving at pace for Cian Kelleher to find the line, Byrne converting for 22-10 on half-time.

The next score could be crucial, Cooney’s night ended prematurely on the receiving end of a hard carry by James Lowe.

Prop Porter’s poach on the floor prompted a penalty which Byrne dispatched to the corner, Lowe and Osborne unable to connect on a short ball.

Leinster pinpointed the counter-ruck for access to the ball and Jamison Gibson-Park orchestrated their phase play against superior numbers.

The athleticism of Baird, muscular work of Lowe and Hugo Keenan’s surge from deep pushed Leinster inside the 22.

The forwards kept it tight enough to squeeze out a penalty which led to a tap-and-go that Ringrose turned into a try, Byrne’s extras making it a one-score game in the 59th minute.

In the aftermath, James Hume was yellow carded for a high tackle on Ringrose in the build-up, making it 14-on-14.

Suddenly, Leinster were in top gear, Porter making a serious impact and the rest of the pack taking the ball on for Ringrose to pick up his second try in three minutes, Byrne’s conversion moving Leinster 24-22 ahead in the 63rd minute.

Worse again, centre Hume was binned to give Leinster a temporary one-man advantage to go with the momentum they had generated.

Osborne’s opportunism and Ringrose’s long ball forward encouraged Gibson-Park and Keenan to chase a lost cause.

Lowe lowered his body in the carry and a series of further dents produced a penalty which Byrne arrowed to the corner.

The lineout worked a treat from Dan Sheehan to Ross Molony, Baird making ground and Porter completing the job for the bonus-point for Byrne’s extras to make it 31-22 in the 74th minute.

Byrne kept the foot on the accelerator to create a fifth try for Lowe in advance of Ulster taking a losing bonus-point from Sam Carter’s consolation try, converted by Neil Doak. 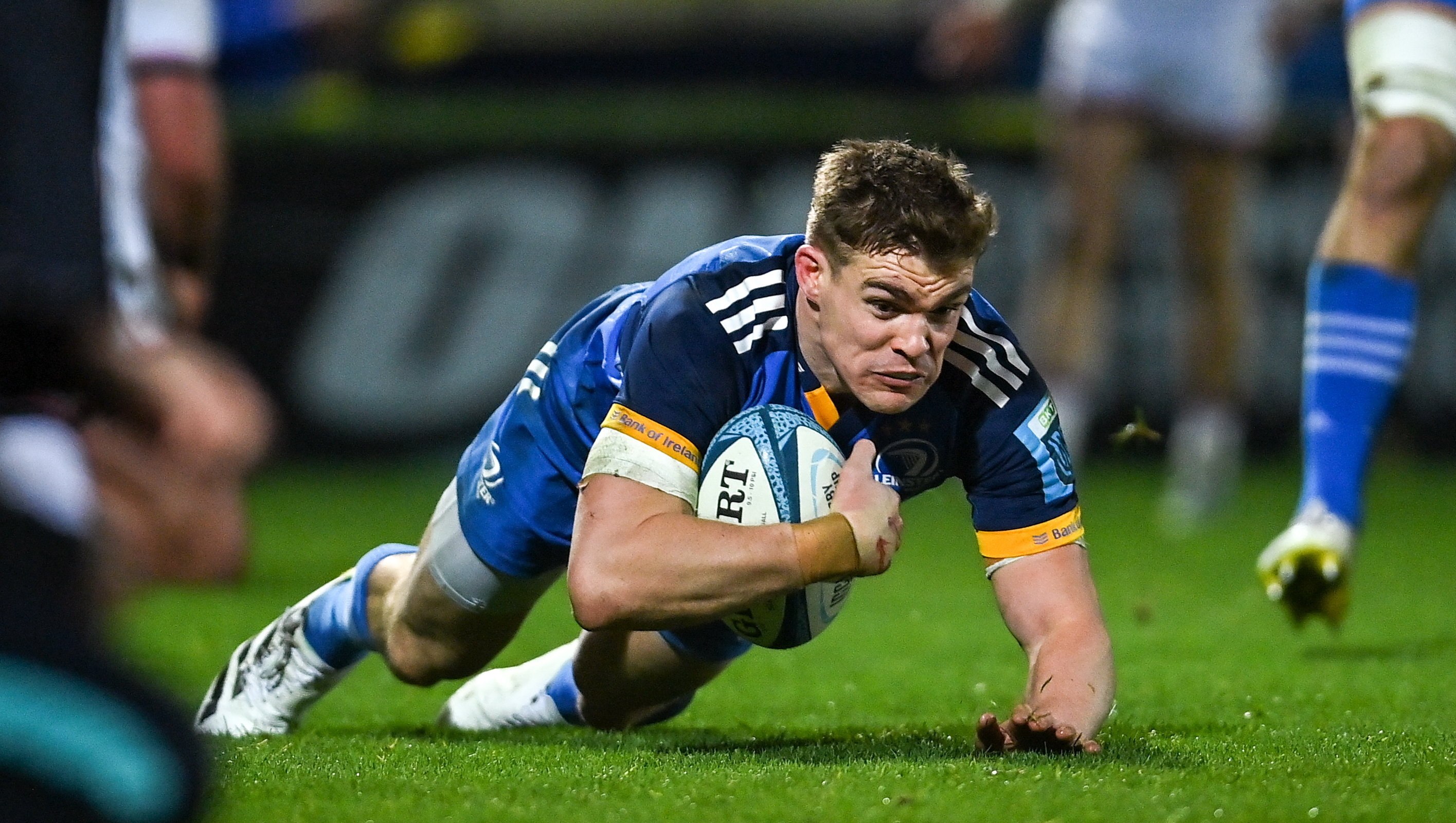