On This Day in 2016: Magnificent Ireland claim historic win over All Blacks

Five years ago today, Ireland ended their 111-year wait for a first victory over New Zealand by bringing the world champions' record winning streak to a juddering halt with a sensational 40-29 victory at Soldier Field.

The All Blacks became the first tier-one nation to win 18 consecutive Tests with a triumph over Australia last month, but their incredible sequence of victories was gone with the wind in Chicago. Ireland came agonisingly close to claiming a first success against the world champions three years prior, surrendering a 19-point advantage to suffer a dramatic defeat right at the end.

New Zealand fought back from 30-8 down early in the second half to trail 33-29 this time around, but Ireland were not to be denied in a city still celebrating a first World Series triumph in over a century for the Chicago Cubs this week.

Joe Schmidt's side were outstanding against the country of his birth, beating the world champions at their own game as they took a 25-8 half-time lead with tries from Jordi Murphy, CJ Stander and Conor Murray.

Simon Zebo added a fourth and Robbie Henshaw crashed over late on, ensuring scores from George Moala, TJ Perenara, Ben Smith and debutant Scott Barrett were in vain as New Zealand suffered their first defeat since going down to the Wallabies in August last year and their only loss to Ireland in 29 Tests.

The Ireland players formed a figure of eight out of respect for late Munster head coach Anthony Foley, who died suddenly in Paris a month prior, as the All Blacks gave another rousing rendition of the Haka. 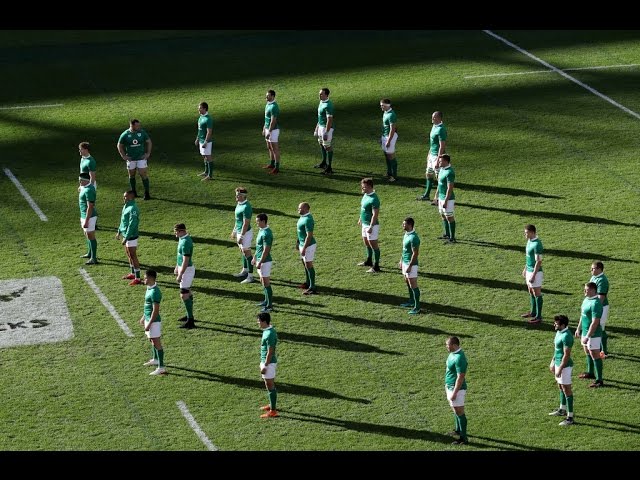 Ireland were rewarded for a positive start when the returning Jonathan Sexton slotted over a penalty, but the All Blacks hit back and Moala picked up a loose ball to dot down after Waisake Naholo made an incisive break.

New Zealand lost Joe Moody to the sin bin for a dangerous tackle on Henshaw in a breathless start and Ireland took advantage of having the extra man, with Murphy going over when the world champions were pushed back by a drive that gathered momentum.

Sexton converted expertly from the right touchline and Stander barged over for a second Ireland try after Rob Kearney made the break before Beauden Barrett reduced the deficit to seven points with a penalty.

Ireland fly-half Sexton responded with another three-pointer to put the underdogs 18-8 to the good, which was preceded by a long stoppage for treatment to Ryan Crotty and Murphy - who were both unable to continue.

Schmidt's men were rampant with the backing of a raucous crowd and things went from bad to worse for the All Blacks when scrum-half Murray sold a clever dummy to race away for a third try, which Sexton converted to put his side 25-8 up at half-time.

Ireland strengthened their grip on the Test when Zebo was left with a simple finish following another powerful drive, but New Zealand rallied and replacement scrum-half Perenara applied the finish after a break from Dane Coles.

Smith added a third try in the corner and Barrett was successful from the tee on both occasions to make it 30-22, but Murray held his nerve to put Ireland 11 points up with a penalty just before the hour-mark.

The momentum was firmly with the best side in the world, though, and Scott Barrett, on for his debut early in the second half, charged through for a debut try which his brother converted to cut Ireland's advantage to 33-29 after 64 minutes.

But Henshaw eased the nerves by powering his way over with time running out and Joey Carbery added the extras as Ireland wrapped up a remarkable victory.

The All Blacks had no excuses for their landmark defeat to Ireland in Chicago, with New Zealand head coach Steve Hansen admitting the "right side won".

The All Blacks had never lost to Ireland since their first meeting in 1905 but that all changed as Ireland ran in five tries to snap New Zealand's streak of 18 consecutive Test wins in the process.

Despite being without Sam Whitelock, Brodie Retallick and Luke Romano, Hansen had no complaints with the loss in the United States.

"In the first half they had all the momentum and we talked before the game about not giving away avoidable penalties but because of the pressure we did and they built momentum and we were chasing them.

"They put us under pressure and deserved the win. We're not going to make any excuses about not having the right people.

"The right side won. The Irish played very well and congratulations to them. When you see their fans going like they are now it's about time they won one."

"We know they're a great side, and you can see how good a side they are by how much it means to our boys to have won that," Best said. "We just knew we had to go out and attack them. If you give them ball and standoff them, they are an unbelievably dangerous outfit.

"We're absolutely ecstatic with a marvellous performance by us."

Ireland's New Zealand-born coach Joe Schmidt noticed some uncharacteristic errors by the All Blacks in the United States as he revelled in the win.

"They are usually incredibly efficient and very parsimonious when it comes to allowing you to get some territory or some points," he said.

"The lads have waited a long time for something like this to happen and they've worked hard in the couple of trainings we had. I think they're delighted and they probably need a couple of days off after that.

"I'm incredibly proud of how the boys put themselves out and worked incredibly hard at 33-29 with that All Black wave, there was a little bit of déjà vu there with them doing a similar thing to us in Dublin three years ago but it was great the way they bounced back and managed to get that score [Robbie Henshaw's try] and get a little bit of breathing space."

"You can't beat the All Blacks with 13 or 14 or 15 or 16 players, you've really got to have about 32 because you're always going to have a bit of attrition and when those guys come off the bench they've got to add value. I felt they did that today and the guys kicked them off really well at the start and probably gave them a bit of confidence when they did come on that we were potentially up to the task today," Schmidt continued.