Saying farewell isn't easy particularly when you have spent your life working towards the goal of representing your country but this was the decision several of test rugby’s leading lights made after the Rugby World Cup Japan last year.

Not many players get to end their test career's on their own terms but that is exactly what some of these men were able to do in the showpiece event last year with the likes of Schalk Brits, Tendai Mtawarira and Francois Louw all getting their 'Richie McCaw moment' by signing off as World Champions.

We pay tribute to these legends of the game by picking an XV of players who ended their test careers in Japan.

Nicknamed "Bender" or "The Accountant", Ben Smith was one of the modern day greats for the All Blacks whether he was starting at fullback or wing winning The Rugby World Cup in 2015.

Smith built a reputation as the best full-back to grace world rugby in the last decade and leaves an incredible legacy as he moved to Pau following the World Cup in Japan.

Tommy Seymour and Igor Galinovskiy both brought their test careers to an end at the World Cup with both players having incredible test careers for their Scotland and Russia respectively.

Galinovskiy made his 50th test appearance at the World Cup after missing the showpiece in 2011 while Tommy Seymour enjoyed a stellar career with Scotland scoring 20 tries in 55 test matches and finished as Scotland's fourth all time top try scorer.

However, DTH van der Merwe pips the pair for a place in the side after his influential career with Canada. He crossed the whitewash 38 times on his way to becoming Canada’s record try-scorer with six of them across four Rugby World Cups.

He also scored in all of Canada's World Cup pool matches in 2015 and finally fulfilled the dream of playing against his country of birth, South Africa during the 2019 edition of the competition.

Revolutionised the role of a centre with his outstanding ability to offload that set the All Blacks on their way to two Rugby World Cup titles.

58 Tests, Three World Cups and just 4 losses in his time as All Black. SBW was a world-beater and will be missed in union as he makes his return to rugby league with the Toronto Wolfpack.

A key asset to the All Blacks and Crusaders, who left New Zealand after the World Cup to take a up a contract in Japan.

Ryan Crotty was an excellent servant of New Zealand Rugby representing the Red of the Crusaders for over a decade and earned 48 test caps for his country in a career that overlapped with All Black legends Ma'a Nonu and Conrad Smith.

Crotty was effective, efficient and quietly brilliant throughout his career and in his own right, a legend of the black jersey.

Calling time on his test career to continue the family tradition of working in the medical profession, Kenki Fukuoka earned high and well deserved praised during the Rugby World Cup in his home country scoring 4 tries as Japan reached the playoffs for the first time.

He scored 25 tries in his 38 tests for his country and will be remembered for his excellent performances, particularly against Scotland and Ireland.

We may see more of the speedster at the Olympics, if and when it takes place, but his career in the 15s format is sadly over. 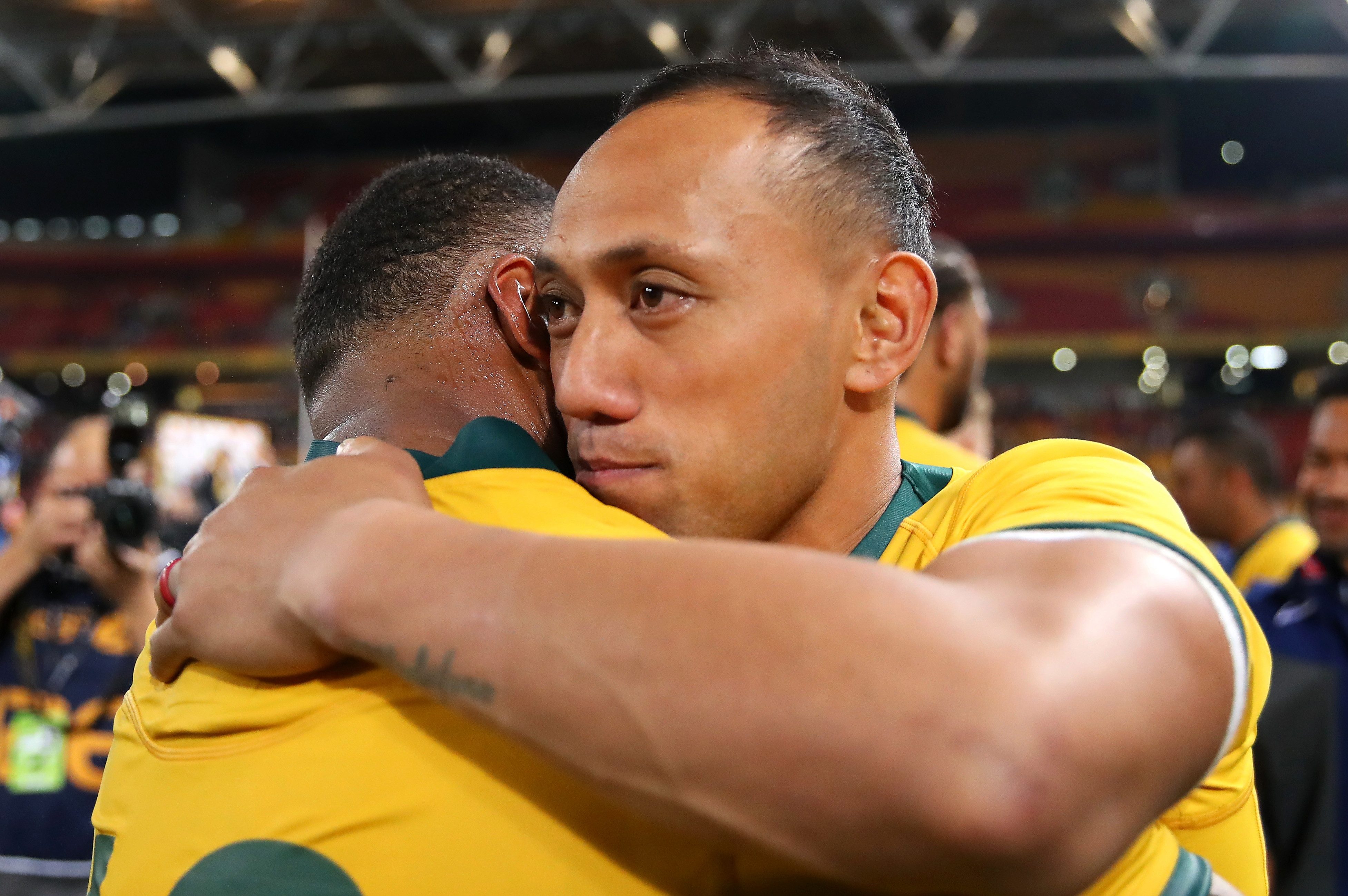 Before we even touch on the incredible journey of Christian Lealiifano, an honourable mention goes out to Former Tonga captain Siale Piutau who signed off in style at, scoring a try in a man-of-the-match performance as Tonga beat the USA – on his 34th birthday.

Piutau was carried off the pitch by his teammates after the game with 43 test caps to his name, representing his country with tremendous grit, determination and excellence.

Returning to Lealiifano, who was told he may never play rugby again when recovering slowly from the blood cancer to representing his country at the highest level.

He made a remarkable return for the Wallabies against Argentina in Brisbane before the World Cup after he fought back to top form to earn a return following his battle with leukaemia.

He would end his career with 26 test caps as he headed off to Japanese club Panasonic Wild Knights and is an inspiration for us all.

Will Genia drew comparisons to the great George Gregan early on in his career, comparisons that he produced on as he went on to earn 110 test caps for the Wallabies including 93 starts and 20 tries.

Genia was world class from start to finish for the Wallabies and will go down as one of the greats to play the role for the Australians and in world rugby.

The nippy Australian beats Scotland's scorer of 714 points, Greig Laidlaw who too will go down as one of the greats to represent his country.

The Former Scottish captain was an inspirational leader and saviour for Scotland time and time again and is another legend that will be sorely missed as he confirmed his retirement after the World Cup.

Known as King Louis, a formidable ball carrier and France's most capped no.8, Louis Picamoles was easily one of the top no.8s in his prime and true stalwart of French rugby.

Capped 82 times, Picamoles was even granted the opportunity to lead his side during a Rugby World Cup match.

For over a decade, David Pocock terrorized opposition breakdown with his incredible ability to turnover the ball and in the process became one of the greatest openside flankers/ back rowers to ever play the game.

Injuries denied Pocock the opportunity to reach three figures worth of test caps but that does not change the fact that he was an incredible asset to the Wallaby pack.

He beats World Cup winner Francois Louw to a place in our side with the former Springbok hardman announcing his retirement after the Springboks' triumph.

Thanks for all the memories @FloLouw and congratulations on a incredible test career 🙌 pic.twitter.com/vjV6LBX9Pd

A close call between Barclay and the excellent Juan Manuel Leguizamon with both players equally deserving of the position.

Both players were outstanding versatile back-rowers and put their bodies on the line time and time again for their country.

Leguizamon was the final member of the Argentina team who won the bronze medal at Rugby World Cup 2007 to retire as he competed at his fourth World Cup in Japan while Barclay, who has been involved in a lot of Scotland's success over the years bowed out captaining his side in his final game against Russia.

Notable mentions for the likes of Tonga's Sione Kalamafoni and USA's John Quill who both bowed out after stellar test careers with both players representing their countries 37 times.

Vahaamahina announced his retirement from test rugby the day after his red card against Wales that ultimately led to France's exit from the competition.

However, Vahaamahina did have an excellent test career beforehand racking up 46 test caps by the time he turned 28 and was physical and abrasive presence in the French pack since his debut in 2012.

Out of retirement before the tournament and right back in afterwards. Gorgodze answered Georgia's SOS to feature at the 2019 Rugby World Cup and added to his legacy as one Georgia's greatest players.

He took his test cap tally to 75 in Japan and will be fondly remembered for his performances between 2003 and 2019, particularly his outstanding showings in the 2011 and 2015 Rugby World Cups.

A true icon of the game.

The first-ever Wallaby prop to tally up 100 appearances for his country, Kepu was a mainstay in the Wallaby squad since debuting way back in 2008 and enjoyed a decade long career with plenty of success.

He beats the extremely efficient and effective Argentine prop Juan Figallo to the side, who also announced his retirement after forcing his way back into the side.

A near-impossible choice to make with long time French captain Guilhem Guirado and charismatic Springbok Schalk Brits both calling time on their career but the excellence and durability of Rory Best gets our #2 jersey.

A historic win over New Zealand and two Grand Slams as captain standout for Best who also toured with the British and Irish Lions while racking up an enormous the captain’s standout achievements.

Brits retired from test rugby for the second time before coming out once again to win the World Cup in Japan and even captained the side on the way to victory. He also became the second-oldest try scorer in Rugby World Cup history after touching down against Namibia, at the grand old age of 38.

After putting his body on the line in 74 test matches for France, Guilhem Guirado also called time on his career after replacing Thierry Dusautoir as Les Bleus’ captain in 2016 and featured at his third Rugby World Cup in Japan.

Our XV is completed by one of the finest, if not the finest, loosehead props the game has ever seen. Tendai Mtawarira better known as 'The Beast' was simply that, a beast.

He claimed worldwide reviews for his devastating performance against the British and Irish Lions which ultimately ended the career of Phil Vickery in 2009 and his career skyrocketed from there.

A test Centurian, a Rugby World Cup, Tri-Nations and Rugby Championship winner, Mtawarira is another player who will go down as one of the best to have done at test level and even saved one of his finest performances for his last appearance in Green and Gold as he took England's scrum apart in the final.