Remembering the amazing Jonah Lomu on his birthday

Through the years, as the menacing cries of the Haka fill the electric air before every test the All Blacks play, the names and faces of the past legends who donned the renowned jersey are called to mind. Not just anyone becomes an All Black – the determination, dedication, sacrifice and ruthlessness required on the path to that dressing room do not form part of the make-up of most personalities who play the game of rugby. On this day five years ago, one such legend was taken from us. After a long battle with kidney disease, Jonah Lomu passed away on the morning of 18 November 2015, in the same town that he was born in; Auckland. It was the conclusion of a life which had a remarkable and unique effect on the game to which it was dedicated.

“Some of them just dive straight at your shoelaces,” Lomu smiles in a 2001 interview. “Some of them have a go at you up high. It’s either in and away or out and in...if not, you’re left with no other options, then run over the top of ‘em.”

Today would have been Jonah Lomu’s 46th birthday 🖤

The concept of the unstoppable force often seemed personified in the immense 1.96m, 120kg figure of Lomu. With ball in hand, the defenders around him appeared to shrink in size as he powered forwards, knocking off tacklers like stones off a wall; it was a sight that left bewildered expressions on the faces of spectators and players alike and made the rest of the sporting world sit up and take notice of rugby.

Lomu was born in 1975 to Tongan parents. His childhood was not easy and saw him subjected to severe physical abuse from his father. One day, at the age of 15, Jonah fought back, throwing his father to the ground and issuing a stern warning against any future abuse. This show of strength and courage saw him kicked out of the family home.

A young life which found itself in a dangerous current was thrown a lifeline when Lomu was given the opportunity to attend Wesley College. There he excelled in athletics; sprinting, shot put, javelin, high jump and hurdles. It was only during his final year of school that he really began to take rugby union seriously – a decision which would eventually add another significant element of renown to the All Black jersey – as he had begun with rugby league while also showing a tremendous talent in the sevens format.

In early 1994, as an 18 year-old, Lomu was included in the New Zealand sevens side for the Hong Kong tour and wowed audiences and players alike – a young giant tearing up the pitch with pace, power and skill far beyond his years.

“His work-rate wasn’t really that great to be a number 8 or a loose-forward, even though he had been tried at blindside flanker and number 8 on several occasions,” said Mac McCallion, Lomu’s former Counties Manukau coach. “I think the wing is his true position.”

The 1994 All Black trials came around, and an invitation was extended to Lomu to don the number 11 jersey for one of the teams. Not long thereafter, history was made when the kid from South Auckland ran out onto the pitch in his country’s colours to become the youngest ever All Black, at the age of 19 years and 45 days – against an innovative French side at Lancaster Park in Christchurch.

Lomu’s opposite number was Emile Ntamack (father of current French fly-half Romain) and, understandably, the youngster’s nerves in the series were evident and his inexperience was brought to light.

“I think I learned more from those two games than I’ve learned from any other game,” Lomu said in an interview years ago. “And I still sit there and play those games in my head.” 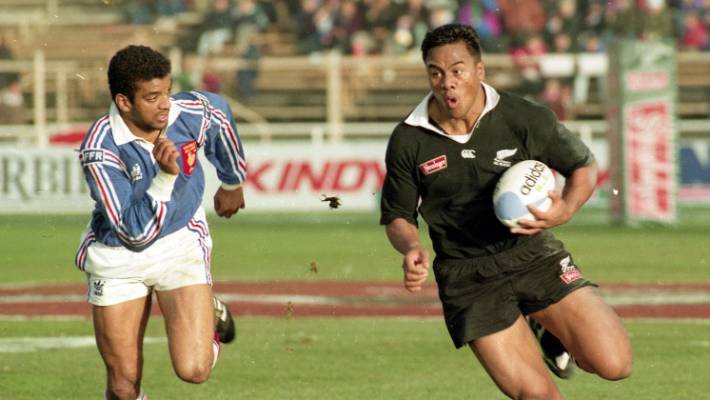 “Maybe we asked a little bit too much of him too soon,” said Laurie Mains, All Black coach at the time. “But I believe that those few games that he had for the All Blacks in ’94 prepared him mentally for what was to come in ’95.”

Mains may well have had a point, as Lomu became by far the most talked about player at the 1995 World Cup in South Africa – lighting up the tournament as only he could do with his one-man-juggernaut style. He had found his place as a player, and the rest of the world trembled.

The wheels were set in motion and Lomu rose as a global superstar, his name mentioned all over the world – in places where rugby had little to no status, thousands of people were introduced to the game through the spellbinding abilities of the man in the number 11 All Black jersey.

From new kid on the block to global superstar ✨

Tragedy struck at the end of ’95 when Lomu was diagnosed with an extremely rare kidney disease, nephritic syndrome. His career was put on ice so as to treat the condition and the strength of his will became apparent when he found himself back in the All Black jersey before long.

He was immense in the 1999 World Cup in the UK and the new millennium smiled upon him as he made a move to Wellington to take up with the Hurricanes and found some of the best form of his life in the year 2000 and 2001.

Sadly, his health issues continued to plague him and it was confirmed in 2003 that he was on dialysis three times a week. Remarkably, he continued to play professional rugby. In 2004, Lomu underwent a kidney transplant – the organ donated by Wellington radio presenter Grant Kereama.

2007 saw Lomu retire from the game although he continued to play charity matches.

He slipped away on this day in 2015 after an unexpected heart attack which was linked to his kidney condition which had reappeared since the transplant. He is survived by his wife Nadene and their two sons, Brayley and Dhyreille.

His death brought the rugby world, and particularly New Zealand, to a standstill as fans, old teammates and old foes alike honoured the giant who gave so much to the game we love.