Should Eddie Jones Blood A New Flyhalf This Test Window?

England resume their test season on 25 October against the Barbarians with the extended test window and conclusion of the Six Nations providing Eddie Jones with the opportunity to give a number of players a chance to prove themselves at the highest level.

Eddie Jones has a favourable run of fixtures early on with the clash against the Barbarians followed by their final Six Nations match of 2020 before their Autumn Nations Cup campaign against Georgia, Ireland and Wales.

England still have a chance of winning the 2020 Six Nations and Jones will look to claim a full house of points against Italy but the games against the Barbarians and Georgia providing him with the opportunity to test some in form players.

While there are a number of positions where Jones could test players, one position he may want to have a good look at the England pivots.

Jones has stuck with George Ford and Owen Farrell for most of his tenure as England boss and with the latter set to tour South Africa with the Lions in 2021 and the former an outside bet, he may want to get a new flyhalf or two in the squad beforehand.

We take a look at six talented uncapped flyhalves Eddie Jones could hand a test debut to. 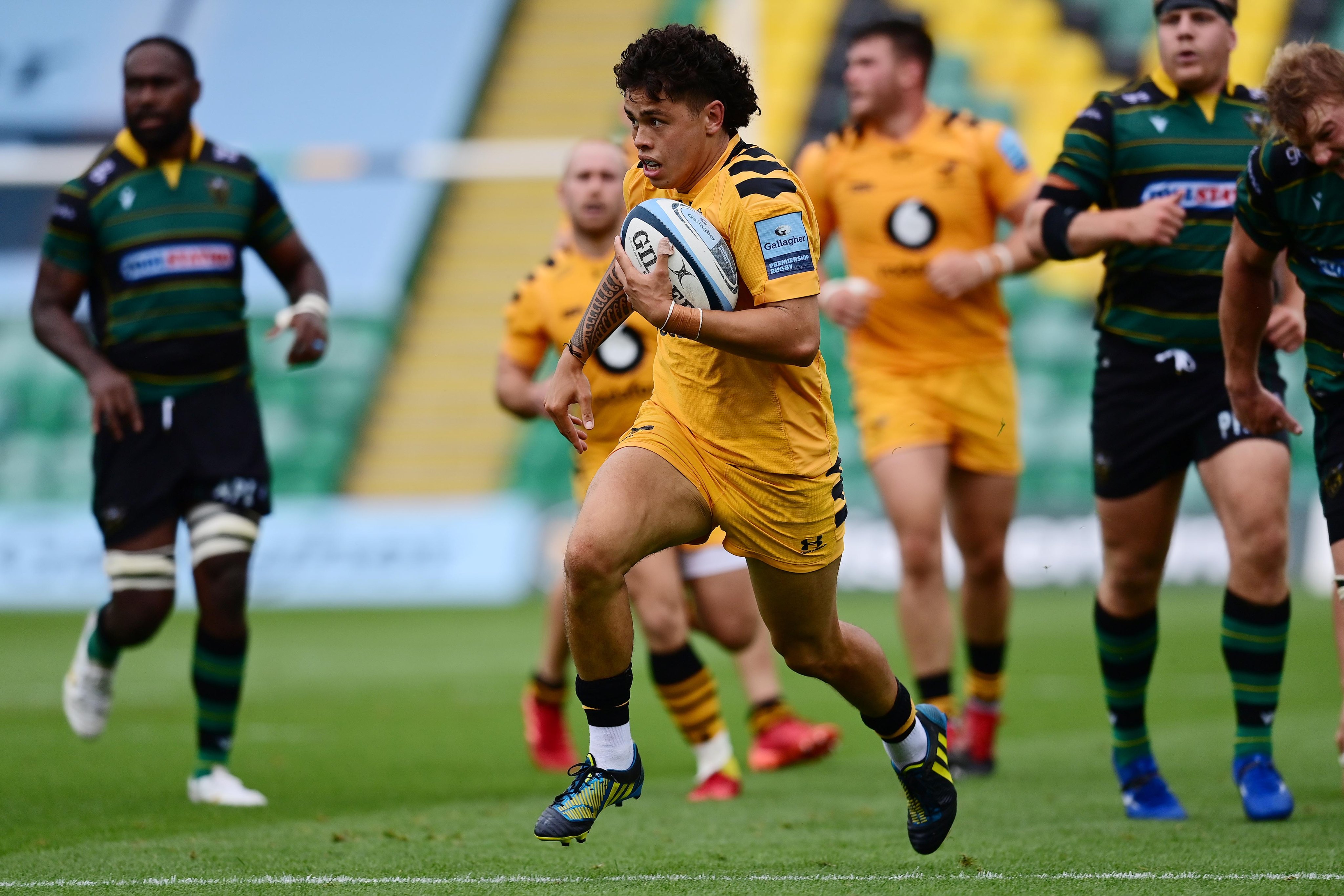 Umaga was included in England's Six Nations squad earlier this year and was been in inspired form for Wasps. The 22-year-old has made the #10 jersey at the Ricoh his own despite the presence of former All Black Lima Sopoaga at the club.

Umaga has played a pivotal role in Wasps' bid for a Premiership play-off place with his side losing just one game since the resumption of the season.

Under Lee Blackett Wasps have played some wonderful attacking rugby with Umaga the chief general. What works in Umaga's favour is that Wasps generally start two playmakers in a similar fashion to England with Jimmy Gopperth playing a similar role to Owen Farrell at inside centre.

The nephew of former All Black Tana Umaga, Jacob has scored six tries for Wasps and assisted a further three in the Premiership while his goal kicking percentage is on the lower side with a 71% success rate. 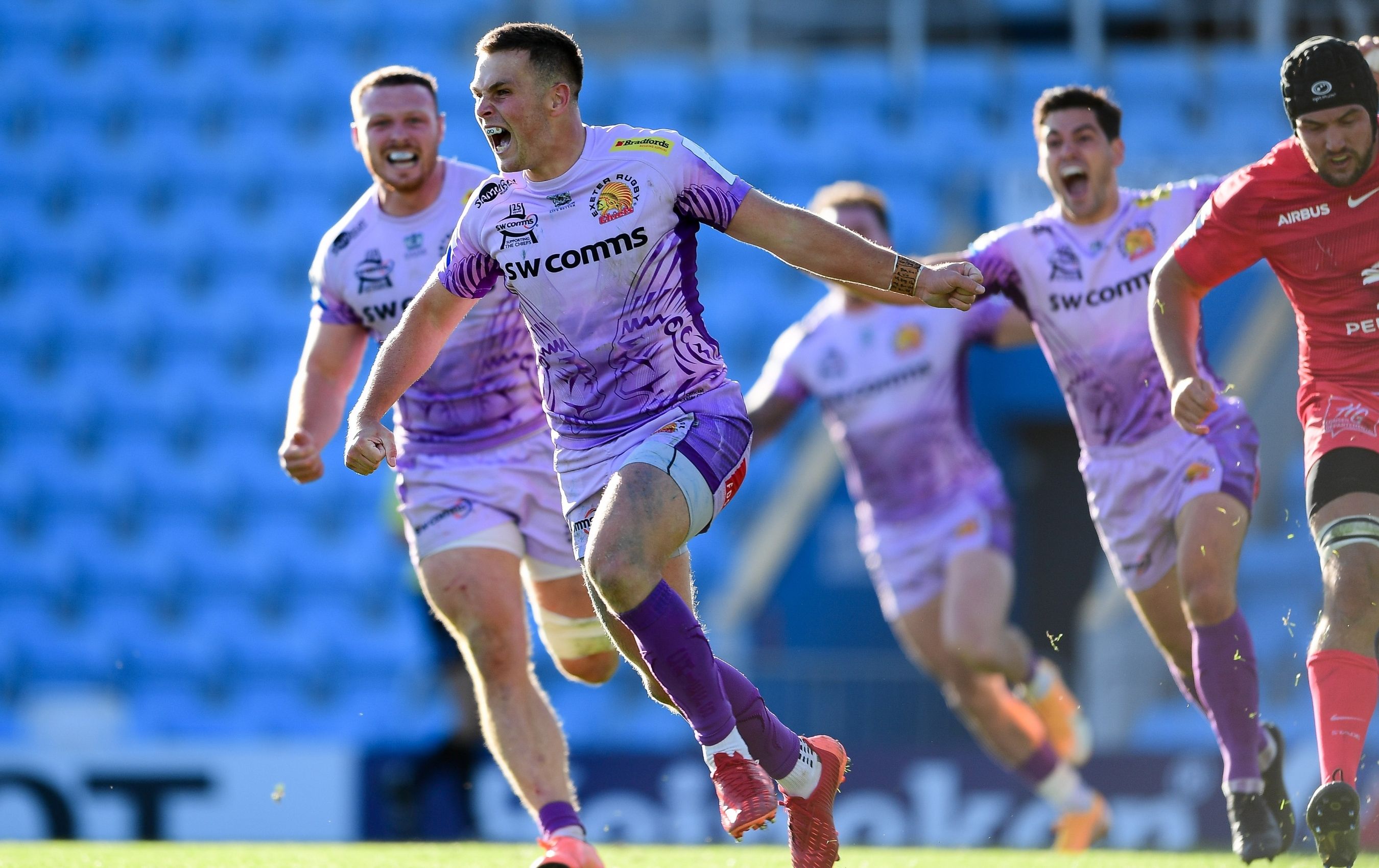 At 23, Simmonds displays experience beyond his years and despite shining for Exeter over the past few seasons, he has notably been overlooked by the England boss.

The younger brother of Sam Simmonds, Joe has been captaining Exeter and led the side to the Champions Cup Final with the Devon side also topping the Premiership table.

Since the resumption of the Premiership, Exeter have lost just their one game against Saracens in a clash which saw both sides field extremely youthful 23s.

The one aspect that may be a sticking point for Eddie Jones on the selection of Simmonds is the lack of kicking he is asked to do at Exeter. Rob Baxter's side regularly using the boot of Stuart Hogg to kick while their scrum-halves kick notably more than their flyhalf. In their semi-final win over Toulouse, Exeter kick a total of 20 times over the 80 minutes with Simmonds accounting for just 3 of those 20 with scrum-halves Jack Maunder (6) and Sam Hidalgo-Clyne (4) making a total of 10 kicks.

While Simmonds is notably a distributing flyhalf, he does know when to take the ball to line with the semi-final win over Toulouse providing the perfect example as he threw a dummy to beat a Toulouse front-rower and race in for the try.

The dummy from Joe Simmonds 🤭 pic.twitter.com/YRBPQzxpLU


The Exeter captain has assisted 3 tries and scored two himself in the Premiership this season while also scoring and assisting two in the Champions Cup so far. 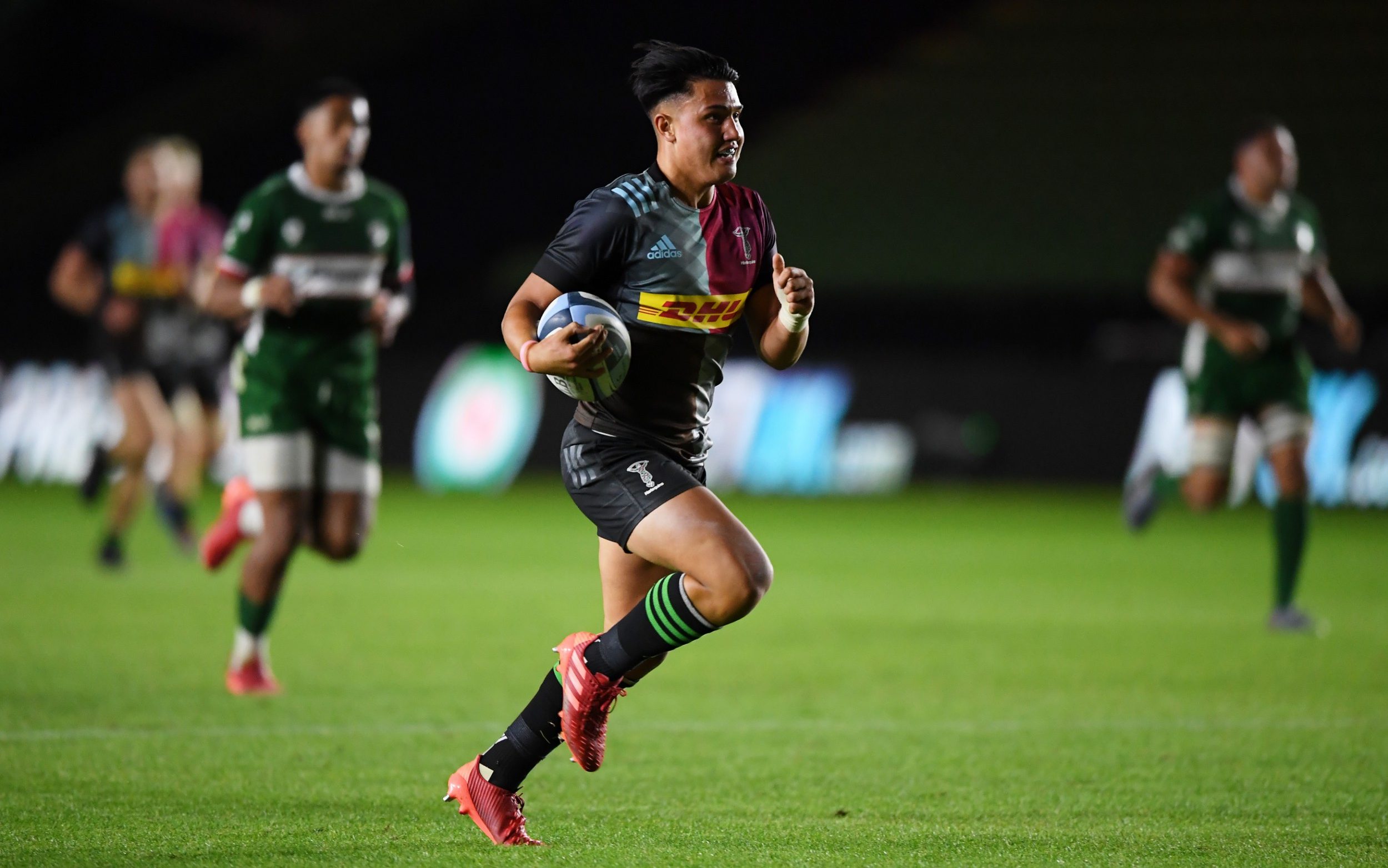 When Marcus Smith broke into the Harlequins squad during the 2017/18 season and quickly made his presence known it looked as if it was rather a matter of when rather if he would make his test bow.

The then 18-year-old made a huge impact in his debut season scoring 179 points in 26 appearances and was drafted into the England squad. Fast forward to 2020 and Smith missed out on his somewhat regular spot in England's training squad for the 2020 Six Nations to Jacob Umaga.

Still a youthful talent Smith, much like Simmonds, shows experience and a calm head beyond his years and despite Harlequins' poor run of results since the resumption of the season, Smith has been excellent.

Gifted with excellent vision, a cannon boot and some slick footwork Smith still looks set to don the white jersey and 2020 could well be the first time he gets the opportunity to do so.  Like Simmonds, Smith is accurate from the tee too boasting a 92% success rate in the Champions Cup this season and a 82% success rate from his 18 games in the Premiership. 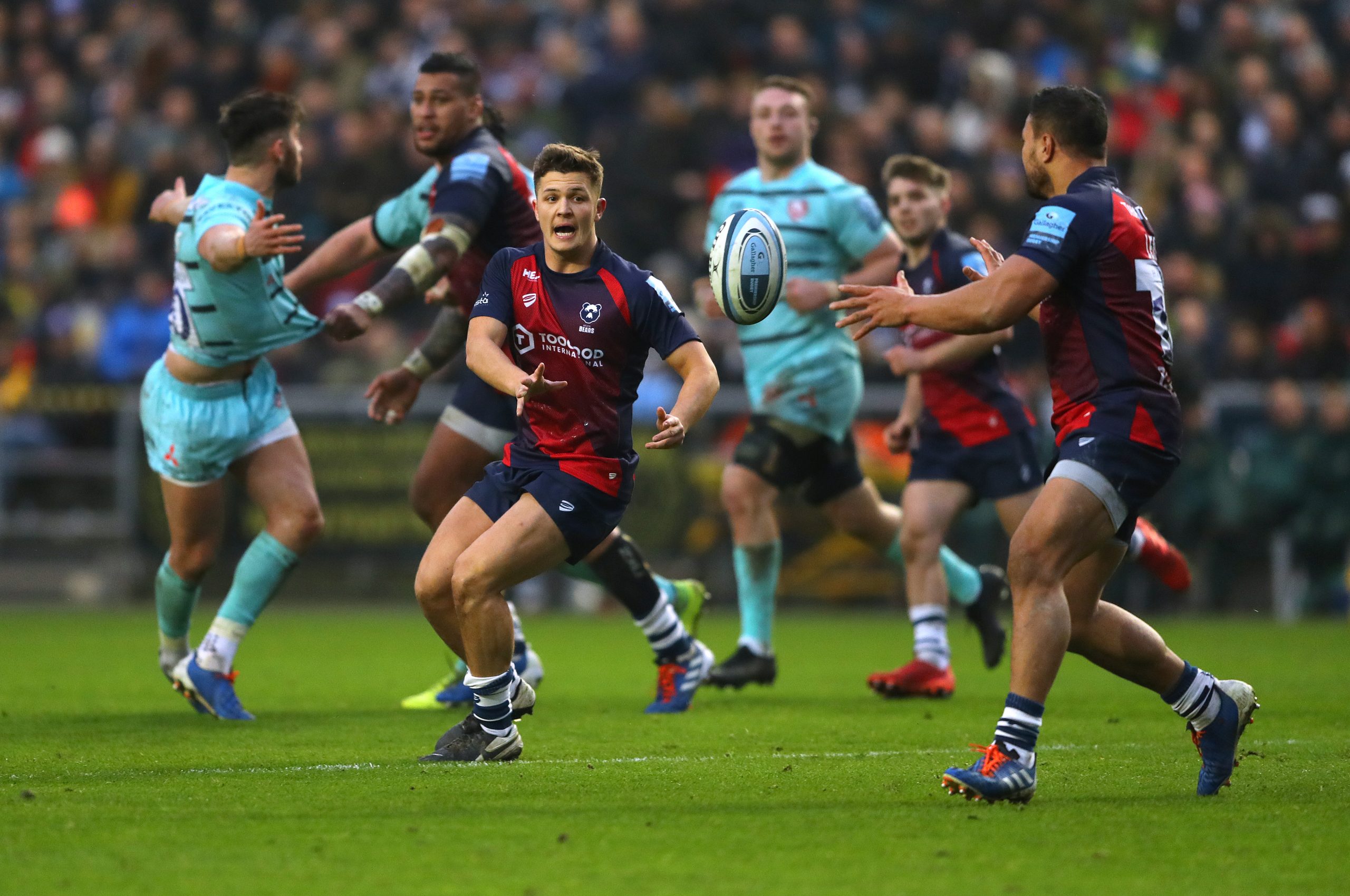 With a single phone call, Eddie Jones could deny Wales and Ireland a potential pivot with Bristol's flyhalf Callum Sheedy eligible to play test rugby for Wales, Ireland and England.

Sheedy has regularly been linked with a call up to the Welsh squad especially during the side's injury crisis at flyhalf during the 2020 Six Nations, however, he is still yet to declare where his loyalties lie. Having spent five years in England, Sheedy qualifies through a residency for Eddie Jones' charges while he has a Welsh mother and was born in Wales and has an Irish father.

Sheedy has marshalled Bristol to the Challenge Cup final having previously made the #10 jersey his own at Bristol overtaking Ireland flyhalf Ian Madigan as the sides first-choice pivot. Sheedy has a wonderful attacking game that has seen the side get the most out of star backs Semi Radradra and Charles Piutau.

His place kicking, like Umaga's, is on the lower end of the scale having converted 76% of his shots at goal in the Premiership. While he hasn't scored a try in his 18 Premiership games he has produced 5 try assists. 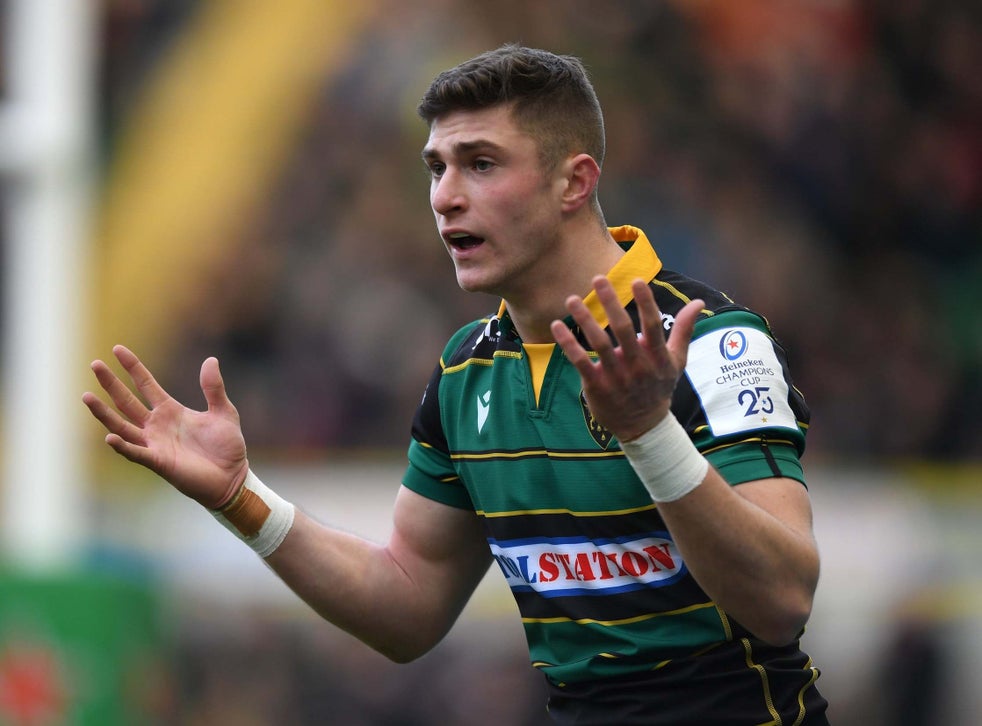 Eddie Jones loves to throw in a surprise when naming his England squads and adding Northampton's second choice flyhalf would certainly be a surprise. The son of former England flyhalf and World Cup winner Paul Grayson, James certainly doesn't lack the talents and ability to make it at test level.

Northampton have struggled since the resumption of the Premiership but Grayson has still managed to make a positive impact for Saints. In his 12 Premiership appearances this season, all of which were in the starting line up, Grayson managed to assist 6 tries, scored one himself and slotted a drop goal.

Like most of the players on this list, Grayson represented England at u20 level and could make the step up to the senior side. Eddie Jones often gets feedback and tips on players from Northampton via the club's head coach Chris Boyd and Grayson could well benefit from a few kind words from his club boss. 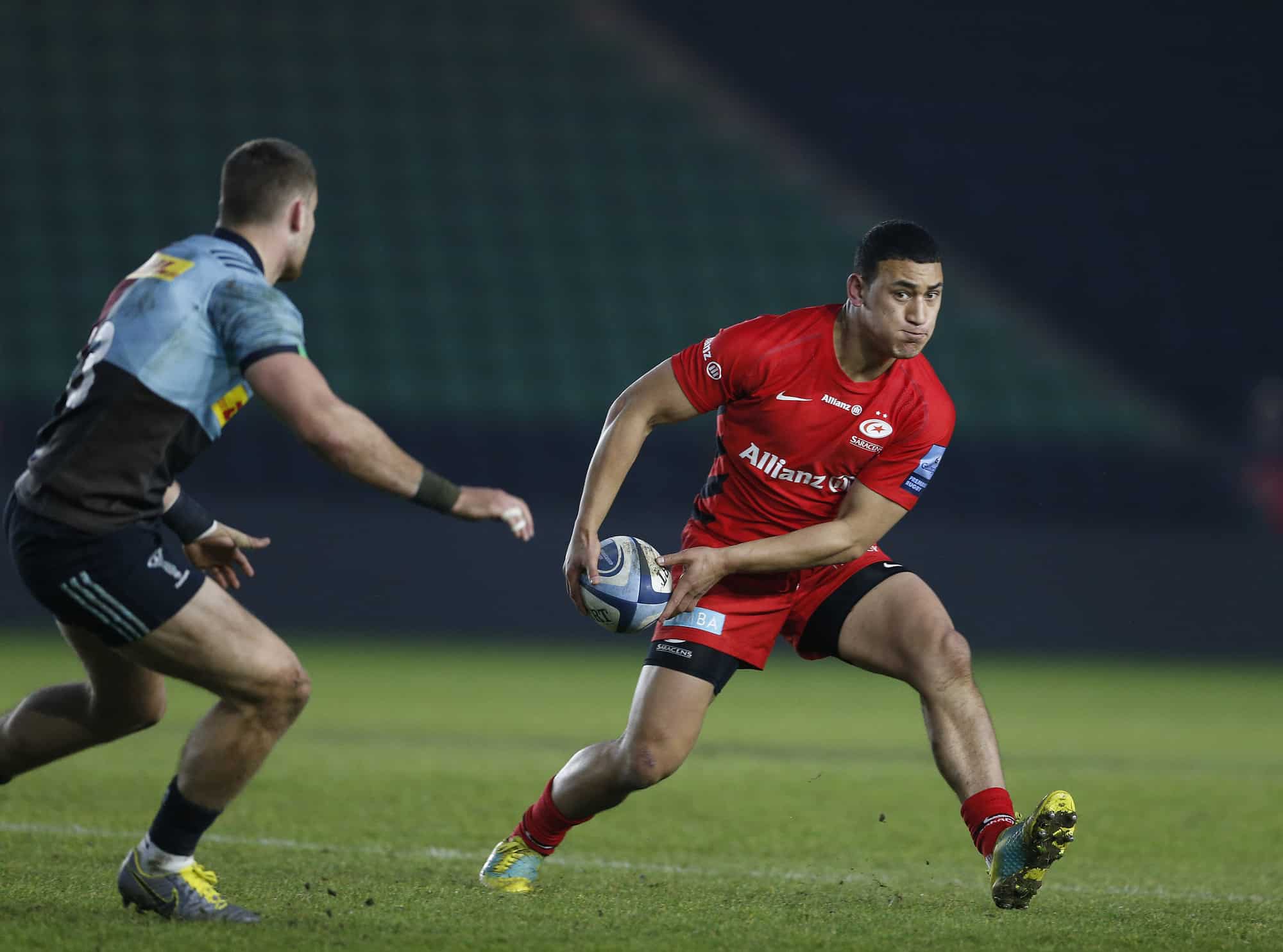 One of the younger players on our list, Manu Vunipola has taken a lot of the playmaking responsibilities on for Saracens this season with the club using Owen Farrell sparingly in the Premiership and Alex Goode spending an extended period of time on the sidelines early on in the season. Vunipola has also benefitted following the departures of Matt Gallagher (Munster) and Max Malins (Bristol Bears).

The cousin of the Vunipola brothers has taken his opportunities and has shone for Saracens. Vunipola has assisted seven tries for Saracens in the Premiership but has had a somewhat of troublesome time from the tee with a 67% success rate.

Vunipola is certainly one to look out for in the future and as mentioned before Eddie Jones does enjoy adding a surprise or two in squads but it may be a bit too soon for Vunipola after Mark McCall opted to stick Alex Goode at flyhalf for Saracens' Champions Cup fixtures instead of backing the youngster.