Round 9 concluded with the Brumbies defeating the Force 31-14 and, in so doing, booking themselves a final in Canberra, while the Rebels lost out to the Waratahs in a high scoring game, 38-32. With their victory, the Brumbies maintain their spot on top of the log with a seven point cushion ahead of the Reds. The Waratahs are currently sitting in third position while the Rebels find themselves in fourth spot ahead of the struggling Force.

The Brumbies were slow starters against the Force, dotting down for the first time in the game in the 32nd minute after trailing 7-0. The men from Canberra proceeded to score four more tries to build their score of 38 while the Force managed only one more.

“We knew the force were going to come out hard in the first half, and they did as well in the beginning of the second, and I’m just proud of the effort,” said Brumbies skipper Alan Alaalatoa.

“It’s really, really special [to be in the final], but we will try not to think about that and just execute our game play next week.”

The Waratahs managed to get the better of a spirited Rebels outfit who pushed their Sydney counterparts close on several occasions throughout an entertaining game of rugby.

The ‘Tahs outscored the Rebels by five tries to four with both teams attacking hungrily. The result means that the Rebels can sneak through into the play-offs if the beat the Force in Round 10.

“We’re still in the hunt. It was clear we were going for the bonus-point win tonight, which would have been nice, but it’s important to get the win. It keeps us in the fight and we’ll see what happens next week.”

“We’re obviously disappointed,” said Rebels skipper Matt Toomua. “I thought the Waratahs were hungrier, particularly around the ruck. It’s a loss, but if we win next weekend then we’re through.” 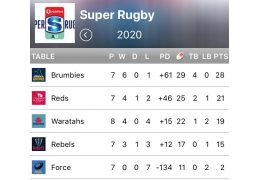