Taniela Tupou has claimed his maiden Pilecki Medal after being voted by his teammates as the St.George Queensland Reds best player in 2020. 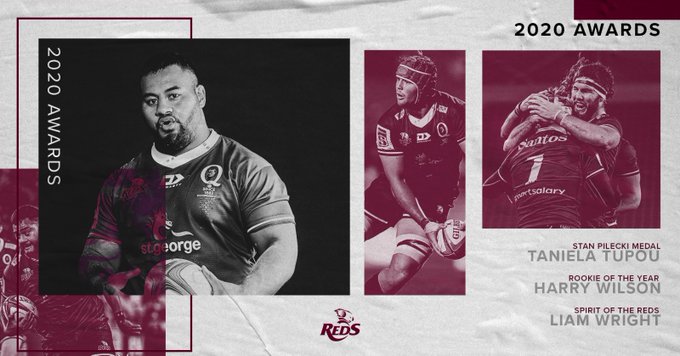 Crowned the Super Rugby AU MVP this season, the frontrower added the Reds’ top award to his list of achievements in 2020 following a Grand Final appearance with Queensland.

The award is named after the late legendary Queensland prop Stan Pilecki – the state’s first centurion.

Due to Wallabies commitments, the award was presented in the Canberra changerooms last Saturday evening following the Reds’ Grand Final loss to the Brumbies at GIO Stadium.

Reds head coach Brad Thorn said: “Well done to Taniela. This is great recognition for him after a standout season with Queensland.

“To be voted as the best player by your teammates is an honour valued most in a team.

“In my opinion, Taniela is a world-class tighthead. He outclassed his opponents this year with some dominant scrummaging. What he does on the field is freakish at times for someone his size. He’s got a damaging combination of both power and skill.

“Off the field he is a humble man with a big heart, and as a group, we couldn’t be more proud of his achievement,” said Thorn.

Along with the Pilecki Medal, the Reds presented two other awards, with Harry Wilson named Rookie of the Year and Liam Wright recognised as best displaying the Spirit of the Reds.

Queensland’s 13 debutants this year were also recognized in the sheds, as well as celebrating Tupou and Lukhan Salakaia-Loto’s 50th Queensland caps.