Due to current regulations, the games will be played behind closed doors. Full Story

Kelly Brown departs Saracens after a decade at the club Long-serving Saracen Kelly Brown has left the club to take up a coaching position at Glasgow Warriors. The move will end a 10-year association with Saracens following the Scot’s transition into coaching upon his retirement from playing. Full story Harlequins have confirmed a deal has been finalised that will see Gabriel Ibitoye leave the Club with immediate effect to join French Top14 club, Agen. Full story

Dragons are upbeat about their new development which sees Welsh legend Jamie Roberts returning to the club after a stint with the Stormers in South Africa.

Roberts is a veteran of 94 tests for Wales as well as three for the British & Irish Lions.

Lions boss Warren Gatland admits he has spoken to former England head coach and that he has a "huge amount of respect" for him.

Stuart Lancaster could return to international rugby with the British and Irish Lions after Warren Gatland admitted to speaking with the former England head coach. Full story Fuser has played 119 times for Treviso during his eight seasons with the club, including 22 Heineken Champions Cup games and a further 87 Pro14 appearances.
Bizarre Story of How Victor Matfield Was Finally Coaxed into Joining Toulon

Several months before the 2007 World Cup in France, Tana Umaga had successfully convinced Wallaby stalwart George Gregan to take up with Toulon.

As excited as he was at the new prospect, in Gregan’s mind, there was something incomplete in the club’s set-up. Full story Kearns, who played 67 Tests for Australia, will lead the Rugby World Cup Bid team in engaging with Federal, State and Local Government as well as international stakeholders including World Rugby Member Unions and he will be a key conduit for the Rugby World Cup 2027 Bid Advisory Board. Full story

Premiership confirm the 2020/21 season will kick off in November Premiership Rugby have confirmed that the 2020/21 Premiership season will begin on the weekend of November 20-22.

The 2019/20 season will resume on the weekend of August 14-16 with nine rounds of matches, which were postponed because of the Coronavirus pandemic, to be completed. Full story

Late signings for Harlequins as they confirm their squad:

Harlequins can today confirm the 44-man senior squad set to compete for the remainder of the current season, backed up by the Club’s 14-player Senior Academy. With a number of new, high-quality players arriving at the Club over the last few months and the impending arrival of South African's Wilco Louw, Andre Esterhuizen, Maks van Dyk and Tyrone Green set to provide a mid-campaign boost. With several leavers heading onto their next chapters, the new-look squad will look to finish the season strongly under Head of Rugby Paul Gustard. 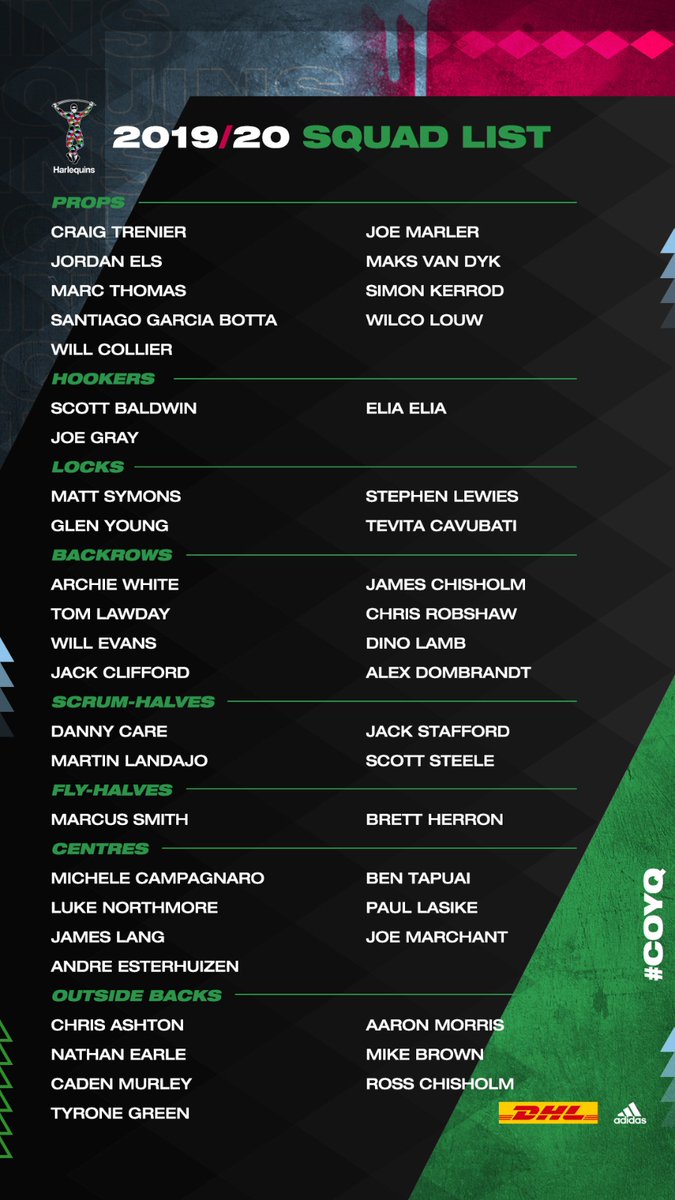