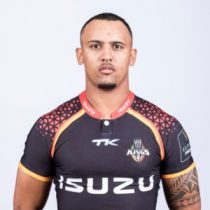 Having attended Labori High School in the Western Cape Harlon Klaasen failed to crack the Boland Craven Week side but went on to represent the union a year later at the Under 19 Currie Cup Competition.

He continued to represent the union's senior side as well as club side Hamiltons.

Klaasen had an outstanding club season in 2016 and was the Western Province SLA Top try scorer.

His efforts saw him join the Eastern Province Kings where he played in the 2017 Currie Cup First Division.

He was called into Southern Kings squad for their clash against Scarlets where he came off the bench to score a try on his Pro 14 debut.

A week later he was named in the starting line up to face Edinburgh.