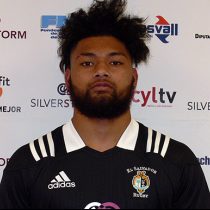 Fifita has prior experience of playing in the northern hemisphere; a highly-productive 2018/19 campaign saw him cross for 13 tries in 16 matches for El Salvador, helping the Spaniards to claim the División de Honor title – the top tier of Spanish rugby.

Fifita made his international debut earlier in 2021, coming off the bench in Tonga’s defeat to New Zealand in Auckland before earning a second cap against Samoa in a Rugby World Cup qualifier.

In 2020, he joined North Harbour and made 3 appearances for the side that season.

In October 2021, he signed a deal with Glasgow Warriors, becoming the fifth Tongan to represent the club, following in the footsteps of Ofa Fainga’anuku, Sila Puafisi, Siua Halanukonuka and Fotu Lokotui.