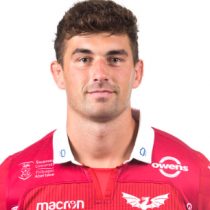 The young second row only began his rugby career in 2007, aged 16, on the wing and in the centre for his hometown club of Caerphilly., making the most of his frame and stature.

An impressive season with Cross Keys saw him picked out by Llanelli RFC and soon signed a development contract with the Scarlets ahead of the 2012-13 season.

He has since been an impressive figure in the Scarlets pack, winning ball in the line out and displaying some ferocious tackling in the loose which often meant he played in the back row also.

During the 2016-17 season, Rawlins played 16 times for Scarlets during the PRO12 season, ending up with a winners' medal for his exploits.