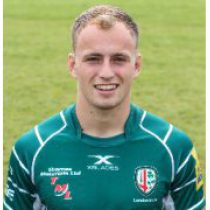 Atkins joined the London Irish Academy by virtue of coming through the AASE programme at the start of the 2016/17 season and continued his development under the watchful eye of former England fly-half Charlie Hodgson.

The youngster has spent time with National League One side Rosslyn Park and signed a deal with Bedford Blues to provide cover at number ten when both Will Hooley and Harry Sheppard were ruled out of action.