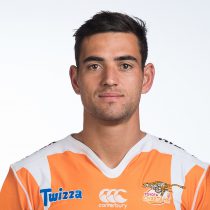 In June 2017 he signed a short-term deal with Super Rugby and Currie Cup side the Cheetahs.