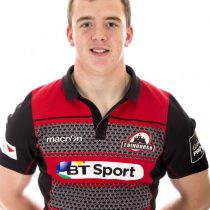 A product of nearby North Berwick High School, Carmichael represented Edinburgh at U17 and U18 levels before progressing into the Scotland age-grade set-up.

After making his U20 debut against Ireland in January 2014, the second-row would play a vital role in the age-grade side’s success during the 2015 Six Nations Championship – a tournament in which he scooped two man-of-the-match awards.

The lock won the Premiership title with Melrose before making his Edinburgh debut off the bench against Munster at Thomond Park during the PRO12 season.

He joined Super Rugby franchise Western Force on a loan-deal in February 2017 as part of his long-term development plan and was called up to join Gregor Townsend’s squad for the final two legs of his maiden summer tour as Scotland head coach.

The versatile forward signed a two-year deal with Edinburgh in December 2017 having made 21 appearances.

In May 2018, Carmichael was included in Scotland's senior squad for the 2018 Summer Tour.

In March 2020 he was added to the 37-man Scotland squad for the remaining rounds of the 2020 Six Nations.

As of June 2020, Carmichael has made 45 appearances for Edinburgh and has scored 10 points.