The Women’s Rugby Super Series got underway last month with the top five women's teams in the world being hosted at the Olympic Training Center in Chula Vista, part of the San Diego metropolitan area.

A total of 10 games was played over five dates that started on Friday, June 28, with the final round being on Sunday, July 14.


An experienced England side were too much for their young USA opponents, with the Red Roses securing a bonus-point 38-5 victory.\

New Zealand overcame a tough Canadian challenge to win 35-20 in the second game of the Women’s Rugby Super Series. As a result Canada dropped one place in the World Rugby Rankings.

France fell to a polished Canadian side 19-35 in the second round of Women's Rugby Super Series 2019.

New Zealand claimed a 33-0 victory to claim the top spot in the standings despite a much-improved performance by the United States.

It wasn't the result the Black Ferns were after in San Diego, as they fell 25-16 to France.

A late try from England snatched victory from the jaws of defeat as they edged Canada 19-17 at the Women’s Rugby Super Series in Chula Vista.

England recovered from an 18-5 halftime deficit to defeat France by a final score of 20-18 in the fourth round of the Women’s Rugby Super Series in San Diego.

The USA Women's Eagles earned their first victory of Super Series 2019 in Round Four, defeating rival Canada with a comeback and second half shutout to win. It was their first test match victory of 2019. 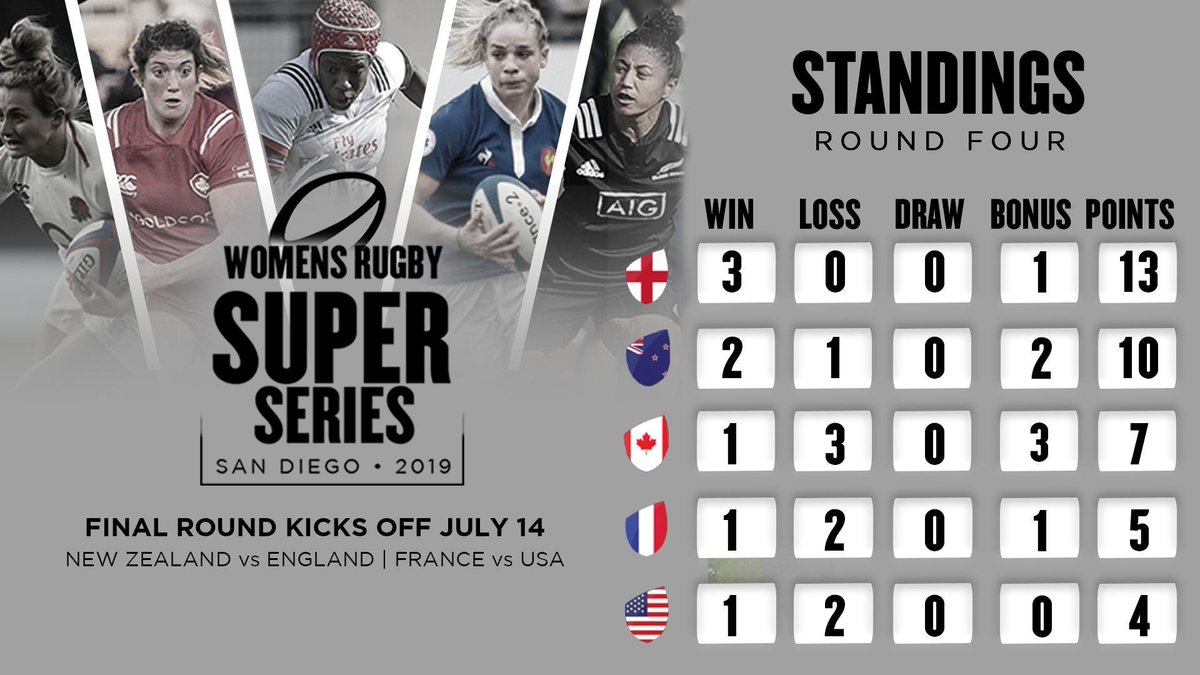 New Zealand underlined their status as the world’s best with a thorough 28-13 victory over England at Torero Stadium in San Diego.

The Women’s Rugby Super Series came to a close on Sunday as France blasted the USA by a final score of 53-14. Les Bleues finish the tournament in 3rd place.

WRAP 🎥 | Hear from Black Ferns players and coaches as they discuss their win over England and wrap up the Super Series tournament in San Diego. #SuperSeries2019 pic.twitter.com/RgEHcY0ICT