23 Stats and facts ahead of the Rugby Championship clash between the Springboks and Wallabies in Port Elizabeth.

- The total test caps for the Springbok starting line-up is 466. There are 146 caps in the backline with 320 caps amongst the forwards. On the bench there are a further 101 caps.

- Eben Etzebeth will play in his record 37th consecutive Test match in this tournament.

Will the Beast feast or will the 'Tongan Thor' drop the hammer? 🔨

We take a look at the Key Battles between the Springboks & Wallabies in the #RugbyChampionship this weekend ➡️ https://t.co/szjKY4JNhP #RSAvAUS pic.twitter.com/rymZwaEt1e

- Tendai Mtawarira will play in his 20th Test match against Australia.

- It will be a first Test against Australia for the following players: André Esterhuizen, Cheslin Kolbe, Sikhumbuzo Notshe, Marco van Staden, Embrose Papier and Damian Willemse.

- Scott Sio and Willie Le Roux both make their 50th test appearance in this match.

- South Africa are undefeated in five games at Nelson Mandela Bay Stadium (W4, D1) and have never conceded more than 15 points in a match here

- This is the first time Australia will play South Africa at this venue.

- It will be the Wallabies’ fifth visit to Port Elizabeth for a Test match against South Africa, they won here the last time they played here 45 years ago in Test series 2-2 in 1963. The previous four Tests were all won by South Africa.

-  South Africa’s biggest win against Australia was in 2008 in Johannesburg when the Springboks ran in eight tries to win by 53-8. On that occasion, Jongi Nokwe became the first Springbok to score four tries in a Test against Australia.

- South Africa are undefeated in five consecutive games at home against Australia (W4, D1) and have kept the Wallabies to 10 points or fewer in all these games except the most recent encounter (27-27)

- Australia haven’t tasted victory in South Africa since 2011 but did earn a draw in the Republic last year, when both sides fought out a 27-all stalemate in Bloemfontein.

- David Pocock (8) has won the most turnovers of any player this tournament; despite playing just three games, he has made more than double that of Australia’s next best player in this category (Bernard Foley, three).

- South Africa’s Pieter-Steph du Toit (61) has made the most tackles in this tournament, including 24 in Round 4 against New Zealand which was a career-best tally for him in a Springboks shirt, he also leads his team for carries (39). 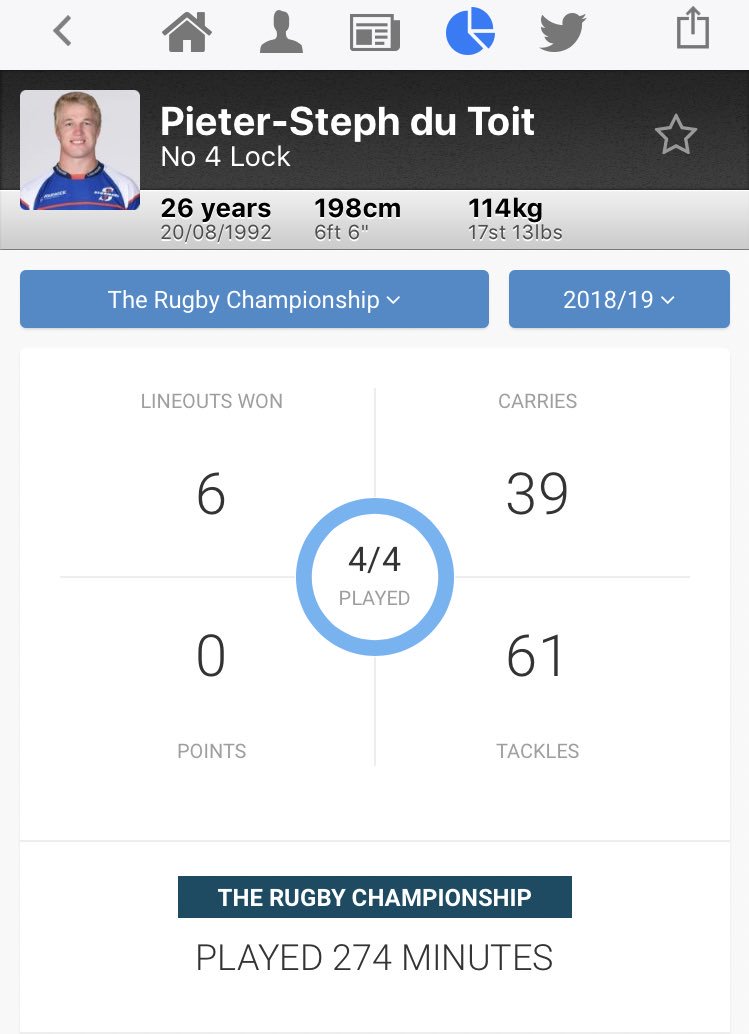 - Willie Le Roux and Faf de Klerk have assisted a joint-high of 4 tries, a record shared with Aaron Smith and Beauden Barrett.

- South Africa have a goal kicking rate of just 57% in this edition of The Rugby Championship, the worst rate of any side, missing an average of 2.3 kicks per game.

- Australia have lost their last three games on the road, a loss this weekend will equal their longest losing streak in away matches since 2008-2009, when they lost four games against Wales, New Zealand (x2) and South Africa.