Most of the squad helped the Jaguares to the Super Rugby Final this year with overseas based players Nicolás Sánchez, Juan Figallo and Benjamín Urdapilleta also added to the squad.

Among the squad included is Juan Manuel Leguizamón who joins the likes of Mario Ledesma, Felipe Contepomi and Agustín Pichot who have represented Los Pumas in four different World Cups.

In addition, he could become the player with the most test caps for Argentina. He is currently 86, one less than Felipe Contepomi. Very close to that figure is also Agustin Creevy, who with 85 caps is another player called for Japan.

Rookies Santiago Carreras, who made his test debut against South Africa has been included in the squad with Lucas Mensa.

Meanwhile, Rafael Mayco Vivas, 21, is the youngest player in the squad. The likes of Facundo Isa, Joaquin Diaz Bonilla and Santiago Cordero are among the surprising exclusions. 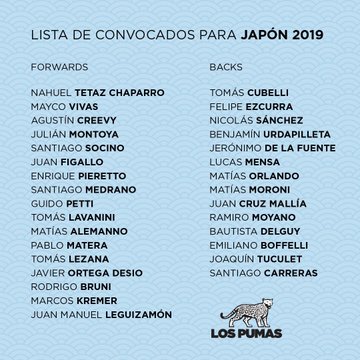