Brive claimed their first victory of the Top 14 campaign as they shocked last season's runners-up and local rivals Clermont Auvergne 28-21 on Sunday.

Promoted Brive hit the front early on in their 100th derby clash with Clermont, Guillaume Namy opening the scoring, with some accurate kicking from Thomas Laranjeira furthering the home side's advantage.

So'otala Fa'aso'o went over soon after, but Clermont gained a foothold through Fritz Lee's try.

Brive could sense an upset, though, and after Sevanaia Galala charged in before the break, they held off a second-half fightback from Clermont, with a late Laranjeira penalty keeping Clermont at bay. 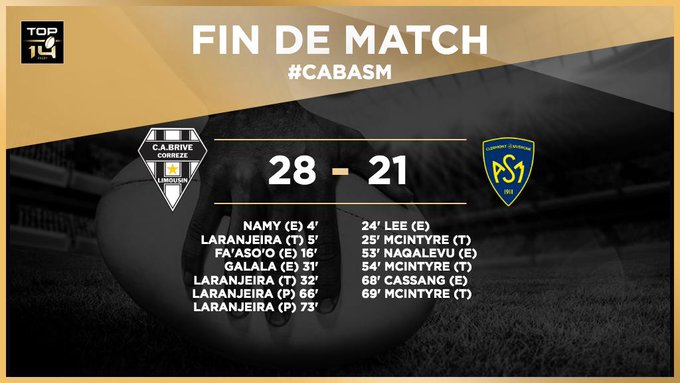 Clermont lost out to Toulouse in last season's final, and the defending champions managed to break their duck for the season with a 20-17 win over Racing 92.

Two defeats on the bounce had left Toulouse in unfamiliar territory at the foot of the standings, but a penalty try helped them make a strong start against Racing, who had Juan Imhoff sent to the sin bin.

Arthur Bonneval extended Toulouse's lead in the 22nd minute, with the visitors' numbers reduced again when Teddy Thomas was cautioned, though Imhoff made up for his earlier discretion by hauling one back for Racing just after the half-hour mark.

Thomas also atoned for his caution with a try in the 64th minute, but with Lucas Tauzin having already nudged the hosts further ahead, Racing could not muster a decisive comeback. 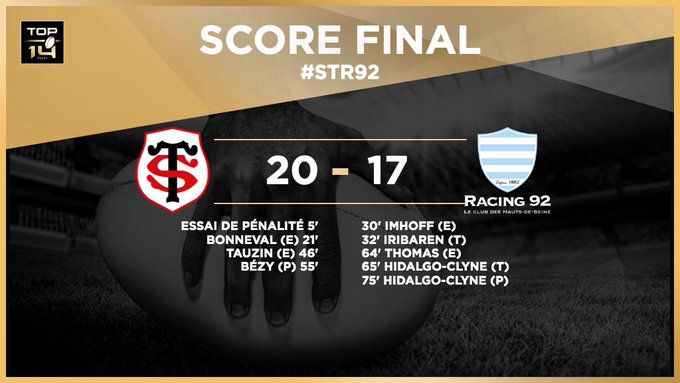