The Brumbies have named their team that will host the Sharks in the Quarter Finals of Super Rugby this weekend.

The men from Durban will provide stiff opposition at GIO Stadium but, the Australian Conference Champion Brumbies have won six games in succession and have not lost a match at home since February and are primed, ready and confident to continue their progress into the Finals.

Head Coach Dan McKellar has made four changes to the team that defeated the Reds to retain the Rod Macqueen Cup with Henry Speight passed fit to reclaim the right-wing spot. Toni Pulu returns to the left wing forming a potent back three alongside Tom Banks.

The other two changes are in the back-row where Tom Cusack and Pete Samu return to the starting XV alongside Rob Valetini, with loose forwards Lachlan McCaffrey and Jahrome Brown providing power and impact from the replacements bench.

The nucleus of the pack that has been the benchmark for the Super Rugby competition in 2019 is retained with the All-international front row of Scott Sio and Allan Alaalatoa packing down with Brumbies leading try-scorer, Folau Fainga’a, the hooker having claimed eleven tries this season.

Christian Lealiifano will win his 149th Super Rugby cap leading the team for the 47th time as Captain, equalling the mark set by George Gregan, with the gifted playmaker also closing in on 950 Super Rugby points.

McKellar has opted for six forwards on the bench, adding Darcy Swain into the finishers with the front row substitutes being Connal McInerney, James Slipper and Leslie Leuluaialii-Makin, the latter running out for his 49th Super Rugby appearance.

Matt Lucas makes a return to the matchday twenty-three as one of two back replacements, together with utility Tom Wright who crossed for his third try of the season in the win over the Reds.

Should the Brumbies be successful in their Quarter Final there are two potential semi-final fixtures that could take place next weekend. If the Jaguares defeat the Chiefs in Buenos Aires, the Brumbies will travel to Argentina, whilst if the Chiefs are successful the New Zealanders will be the opposition at GIO Stadium.

In the case of a home semi-final against the Chiefs, ticketing information will be released via our website and social media channels immediately after the final whistle of the match with the Sharks. 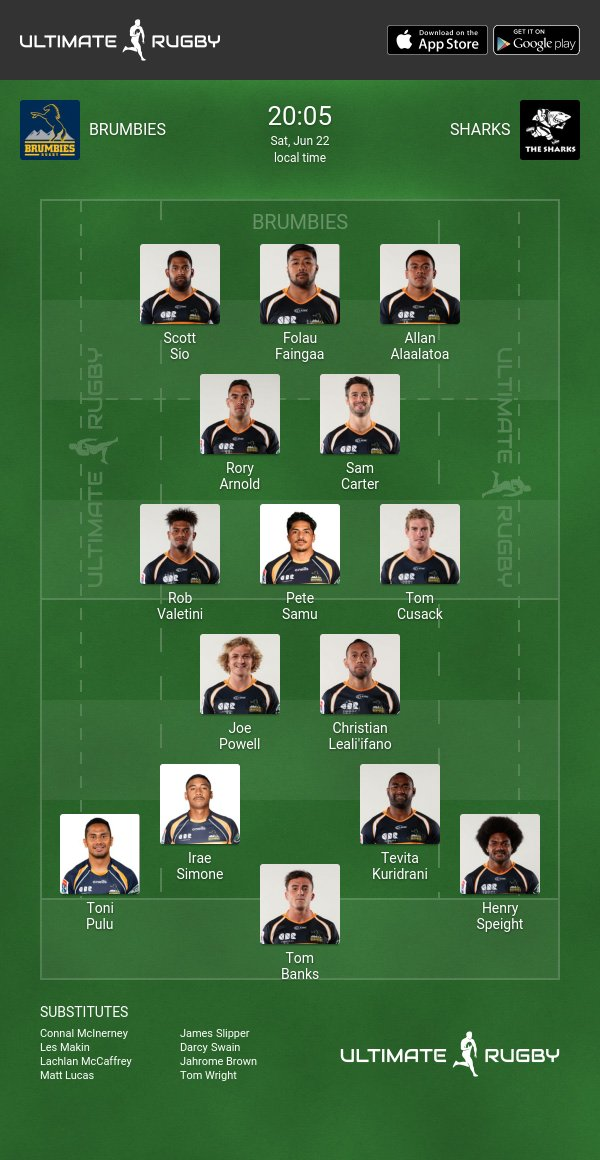