The TOP14 was in full swing this past weekend with six fixtures taking place as a few members of the French squad returning to their clubs following the cancellation of the Autumn Nations Cup game against Fiji.

An agreement with the French National team and the TOP14 clubs will see the large majority of the France 2020 Six Nations squad play their final test against Scotland this coming weekend.

The agreement stated that a player could only play three tests for France this Autumn. Fabien Galthie updated his squad shortly after the cancellation of the Fiji test having named a largely changed squad for the trip to Scotland earlier in the week.

The squad saw the large majority of the players who represented France during the Six Nations return after being released to their clubs. 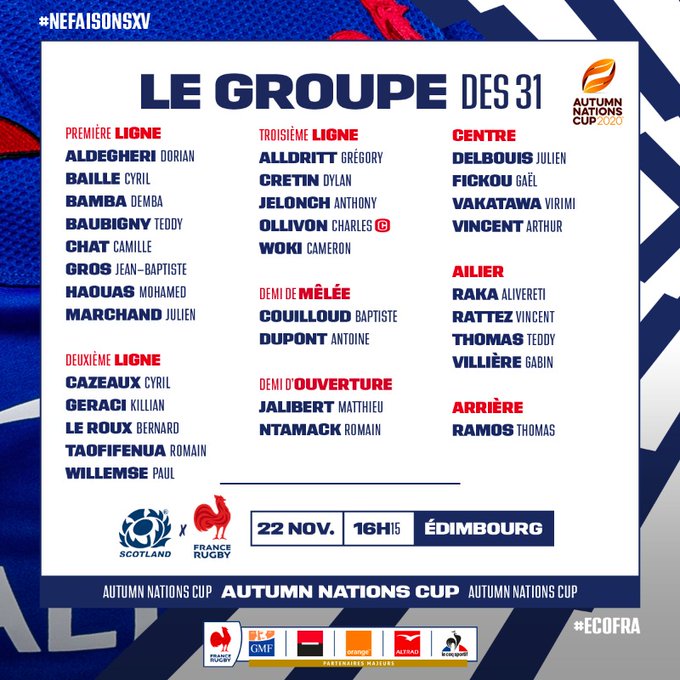 With France now set to be at full strength against Scotland, the attention will turn to who Galthie picks to face off against Italy in a fortnight. One of the biggest calls he will have to make is who will replace captain Charles Ollivon in the starting line up. Castres' Anthony Jelonch has already joined the squad and the uncapped flanker provides Galthie with a like for like replacement for Ollivon with his strong ball carrying ability, high work rate and excellence in the lineout. Bordeaux's 22-year-old Cameron Woki was also used largely from the bench for France during the early stages of the Six Nations and could get the opportunity to prove himself having missed France's last two tests.

Macalou was one of the players that was initially called up to the test squad for Scotland game but was subsequently left out of the updated squad once the Fiji game was cancelled. Macalou responded well to his omission from as he starred in Stade Francais' comprehensive 35-13 win over Ronan O'Gara's men.

Stade Francais claimed the bonus point win scoring four tries to La Rochell's one with Macalou scoring two and playing a massive role in the third. He made this break from inside his own half evading Springbok back Dillyn Leyds in doing so before sending Jonathan Danty away down the touchline. The centre then produced an excellent behind the back offload to put former Wallaby Sefa Naivalu in for Stade's first try of the game.

Again, he was lethal in the wider channels as he ran a neat support line off of Naivalu who managed to get the offload away to him. Macalou breezed past the attempted tackle of Leyds again before racing into the 22 and shrugging off an attempted tackle from Jules Plisson.

He almost scored another after some quick thinking at a lineout early in the second half.

La Rochelle failed to secure the ball effectively and Macalou was quickest to react as he kicked the ball on and was just unable to regather the ball with a clear run to the try line.

20 minutes later, he secured the result and the bonus point for Stade Francais just after the hour mark as he linked up with fullback Telusa Veainu in the wider channels to sprint in for the score.

Macalou is well known for his blistering pace for a forward in France and he clearly showed that off against La Rochelle as he made more running metres (103) than any other player in the game. He also managed to beat five defenders and make three clean breaks.

It wasn't all out attack for the Frenchman as he made 10 tackles and won a turnover for the side.

Fabien Galthie has turned things around for France since taking over after the Rugby World Cup in Japan and the next few weeks may well be his toughest yet as he tests the depth of his squad.

Macalou is a very different player to Charles Ollivon but it certainly wouldn't hurt for Galthie to add a bit more depth and variety to his stocks.